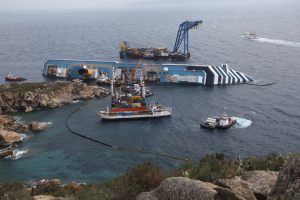 Nat Geo’s The Raising of the Costa Concordia

German producer and distributor Beta Film is the third copro partner on Concordia (WT) and is expected to handle international sales.

The Costa Concordia cruise ship was shipwrecked off the Italian coast in early 2012. The subsequent rescue effort attracted international headlines and the TV movie makes particular sense for the German partners as many passengers on board came from the country.

The event TV movie project started out at Lifetime before RTL and Beta came on board and reworked the production model. The bulk of the funding will come from the German partners, with the film being shot in English and dubbed for the German market.

“We turned it around and made it a German production, coproduced with Lifetime,” Welbers said. “We can shoot it in English and it is a very natural project [for the copro partners.”

Last year Nat Geo ordered The Raising of the Costa Concordia (pictured) a one-off doc about the Concordia shipwreck, but the Lifetime-RTL-Beta movie will be the first time the events surrounding the disaster have been dramatised.