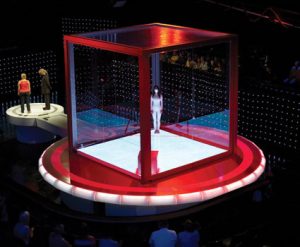 They are creating Cats on the Roof Media, which will be an umbrella brand comprising three subsidiary prodcos that sits within the production wing of UK broadcaster ITV.

Objective co-founder O’Connor will oversee Cats on the Roof.

Adler, who created The Cube (pictured), will run gameshow-focused Gameface Productions as managing director, while Second Act Productions will focus on scripted comedy.

Crook existing label, Crook Productions (The Incredible Mr. Goodwin), will also be part of the group.

ITVS MD Kevin Lygo, his finance chief David McGraynor, and ITVS UK MD Julian Bellamy will both sit on the board of Cats on the Roof. ITVS has been looking to increase its in-house production capabilities, and the addition of the Objective execs looks like a direct response to this.

The deal has sparked concern from the wider UK entertainment production community, with sources suggesting the new group’s creation will limit their chances of commissions from ITV.

The news, first reported yesterday by UK trade Broadcast, comes in the same week ITV was revealed to be close to a deal with UK-based production and distribution company Twofour Group.

The departures of four top executives is a blow for Objective, which is part of Discovery Communications and Liberty Global-owned All3 and is behind series such as The Cube and Peep Show.

Andrew Newman will continue to run the UK-based producer along with commercial and finance director Stuart Duthie.

“We wish Paul, Adam and Matt all the best as they leave Objective to pursue other opportunities,” All3 said in a statement.

“This has been on the cards for some time so we will be making an announcement on replacements within the team in due course.”