More than one billion homes globally now have digital television, according to new research. 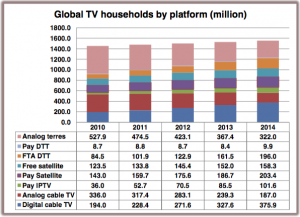 In comparison, 509 million analogue TV homes remain, though this has fallen from 866 million at the end of 2010. Analogue terrestrial homes fell by 304 million, and analogue cable homes were down 149 million.

With the 455 million DTT additions, 111 million came from primary DTT – homes that have taken digital terrestrial, but not subscribing to cable satellite or IPTV. Digital cable contributed 182 million, and there were more IPTV additions (66 million) than pay TV satellite additions (60 million).

Two-hundred-and-eighty-seven million of the new digital TV homes came from the Asia Pacific region, taking the regional total to 513 million. China became the largest digital TV territory in the world in 2010 and at the end of 2014 had 285 million homes – or 27% of the global total.

Meanwhile, analogue and digital pay TV subscribers reached 878 million by 2014, which was up from 2010’s 718 million. Asia Pacific saw the biggest growth in this space too, increasing numbers by 106 million, a large proportion of the additions. North America was the second largest region, although the number was lower than its 2010 level.

China had the most number of overall pay TV subs, adding 59 million in the 2010-2014 period to reach 254 million. India, Brazil, Mexico and Indonesia all showed strong growth, though numbers fell in Italy, the US and France.

Overall pay TV revenues from subscriptions and on-demand sales crossed the US$200 billion mark last year, up 14.5% from 2010’s US$176 billion figure. Analogue and digital cable generated the most revenues, contributing US$92 billion, though these numbers are falling. IPTV came in much lower at US$19.8 billion, but this was up from US$10 billion in 2010.

North America still generates about half of all pay TV revenues, with its recorded figures about ten times the amount of the second-placed China.