Successfully framing a global icon is always a challenge for TV companies, but Lifetime has more experience than most. In the past 12 months alone it has told the stories of singers Whitney Houston and Aaliyah, but tackling the myth of Marilyn Monroe was a bigger undertaking altogether.

Lifetime’s senior VP of original movies, Tanya Lopez, says the channel’s effort to depict the woman who came to define Hollywood-style femininity and 20th century sexuality differs from others because “what this film does is really show the vulnerable side of Marilyn, or Norma Jeane, as she was first known”.

Using the narrative device of a therapist’s chair, the Asylum Entertainment-produced show stars Kelli Garner (Pan Am) as a damaged Monroe looking back at the key moments in her life, including marriages to baseball star Joe DiMaggio and playwright Arthur Miller, her emergence as a star and her troublesome relationship with her bi-polar mother, played by modern-day movie star, Susan Sarandon (Thelma & Louise).

That mother-daughter relationship plays a most significant role in The Secret Life of Marilyn Monroe. “The film looks at Marilyn’s emergence from Norma Jayne into the Marilyn we know, and at the ghosts of her past that she carried with her,” says Lopez.

“Her mother really had such an effect on her and left a deep scar that all the accolades, love and adoration could not replace.

“This is about her most authentic side,” adds Lopez. “The image we have, putting this woman on a pedestal – a woman who embodies everything about beauty and sexuality – is challenged. We learn she is actually an everyday woman.” 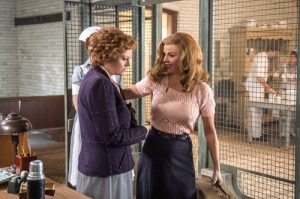 Marilyn is based on J. Randy Taraborrelli’s book The Secret Life of Marilyn Monroe, which explored the darker side of the siren’s life. It landed with A+E a few years back.

“We were surprised [when the project came to us], as you do think you know everything about her,” says Lopez. “Once we’d read the book, we developed it and wanted to see if we could translate it into a film. There really are secrets the audience will learn.”