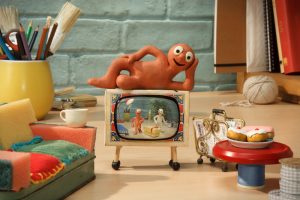 Aardman’s classic clay-mation character Morph will return to UK screens next month and the kids producer and distributor will launch the new series internationally.

The new series, Morph, was commissioned by preschool channel CBBC and will use the same clay and stop motion technique.

It will be produced out of Aardman’s Bristol base and the company has retained global rights and will sell it internationally through its distribution arm.

Peter Lord, Aardman co-founder and co-creator of Morph said: “Both Morph and I are equally delighted that his latest adventures are back on the BBC. Although he’s been away for a while, I’m delighted to report that he’s as lively and full-of-fun as ever – and rather more youthful than his creators! It’s fantastic to see him back in his rightful home.”

Cheryl Taylor Controller of CBBC said: “CBBC are delighted that Morph is back on our screens this year. His playful and curious persona has always been a delight and we know that viewers of all ages will welcome him with open arms.”

The new series launch follows a Kickstarter campaign that raised over £100,000 for a new 15×1-2mins series. Those episodes were released on a dedicated YouTube channel and will now be on linear TV.