Studio chief Armando Nuñez tells TBI what buyers can expect from this year’s crop of new dramas and comedies.

TBI: How important is the LA Screenings compared with the various other international markets?

AN: It has become the most important event of the year and the actual number of platforms and people coming here for this ritual is increasing and that is a testament to the demand there is out there. The broadcasters who in leaner time sent fewer people are sending bigger groups and there has also been an evolution in how we screen content; we now have a number of different screenings, in Prague, London and Madrid as well as LA. I’m not a big fan of online screening – acquiring a show is just one part of the process and coming to the Screenings means [buyers] can understand the marketing, scheduling and everything else about a show.

TBI: What are the trends this year?

AN: For our own network, last year was phenomenal, it was basically five for five and half [mid-season series The McCarthys was cancelled by CBS], but everything else CBS launched on the network is returning. Between that and all of the other long running shows, shelf-space at CBS is incredibly scarce and valuable.

TBI: There are several movie-to-TV projects this year and you have one of them with new procedural Limitless (top).

AN: CBS now has a reputation for procedurals with a twist. Limitless is based on the 2011 movie with Bradley Cooper and he is in the pilot. The international market is clamouring for procedurals and they are working increasingly well. They work, and work for a long time across many cycles. From an investment point of view, if a show only goes to six episodes, it does no-one any good. First and foremost [shows] need to work in the US, and Limitless has the biggest chance because it is on CBS, on Tuesdays [at 10pm] after two top dramas in NCIS and NCIS: New Orleans. The odds of succeeding there are pretty good.

TBI: And you distribute one of the biggest procedurals ever in the shape of CSI; how will it impact CBS Studios International now that is coming to an end?

AN: 30 years from now people will be watching CSI. It has run to 344 episodes over 15 years and is really the series that reintroduced American content to primetime around the world. It has spawned three spin-offs and there are almost 750 episodes. There are platforms that haven’t been invented yet that will be carrying it in years to come, and CSI: Cyber is carrying on the tradition: it is the perfect new CSI. 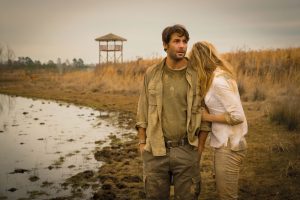 TBI: Tell us about the new summer series, Zoo.

AN: CBS created a new genre, the ‘summer event series’. Summer used to mean reality, lower cost series and repeats, but you must, as a broadcaster, be relevant year-round and two years CBS took the risk, with Under the Dome [in 2013]. It was a new model of programming and was a huge success almost everywhere. Then Extant came along and was a hugely successful and these thirteen-part series work well in linear and SVOD. We will have three this summer and the market is very excited about Zoo.

TBI: Tell us about the new comedies; Angel from Hell with and Crazy Ex-Girlfriends (right), which initially was developed for cable.

AN: It will be interesting to see the reaction on the comedy side, it’s trickier to develop and get right. It’s always interesting to see how comedies are absorbed and understood by the 1,600-1,700 buyers. We’ll start [the sales effort] with the English-speaking world and where there are sizable English-speaking audiences, such as Scandinavia. Crazy Ex-Girlfriends was developed for Showtime, but The CW has it, and the pilot has not been redone for them. It’s a dramedy if you will. Angel from Hell and has a unique and perspective than a lot of mutli-cam comedies with their studio audiences. Jane [Lynch] stars and is very well known from Glee, so there is that built-in recognition. It’s a comedy and drama at the same time.