Fox’s global sales chief is this year presenting a wide-ranging slate of serialised dramas, procedurals and comedies. Here, she tells TBI about what buyers can expect

ME: We’ve got a big slate and have been working together with our production units to get more procedural dramas. We’ve established ourselves as a serialised specialist, but buyers want fresh procedurals and we need them in our line-up.

Since Dana Walden and Gary Newman took over a relationship growing between our production units and the network similar to what CBS, ABC and NBC have. That’s why you’ll see more additional content.

TBI: Minority Report has garnered plenty of pre-market buzz. What is your take on it?

ME: One thing out of many that’s interesting about Minority Report is it’s the first time Spielberg has authorised a TV series of one of his films. He also took an executive producer credit, which he doesn’t always do, and that’s a great endorsement from the man. Tonally, it’s futuristic in an accessible way, and has been screening really, really well so far.

TBI: That’s one procedural, and Fox has others this year too… 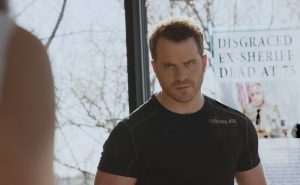 ME: Yes, The Frankenstein Code. It is intriguing for all of us to think on the chance to come back and fix the mistakes of the past but also about the dangers of that.

We had mixed emotions about the name, as it’s not the original Frankenstein story. Our character is definitely a monster but of a really different kind. It is another that has been screening really well.

TBI: And on the medical front there’s Rosewood. What’s interesting about it?

ME: Networks can be big and more fun than cable, which has gone down a really dark path, and in this we have a wonderful and appealing central character. Rosewood is a relentlessly upbeat pathologist, but gets himself involved in these murder cases. You can compare him to another network doctor, Quincy. Rosewood spots what the police can’t – the effects crimes can have on a body that they have missed.

ME: Well, it’s absolutely hilarious and plays to Rob’s strengths: he doesn’t take himself too seriously but knows what makes a great network comedy. This is a funny family drama in which he tries to remake his life in a more meaningful way.

TBI: You’ve also got a new comedy, Life in Pieces, on CBS, which is one of the more successful networks for sitcom.

ME: Everyone is looking to try to portray drama – Modern Family was a very big success because it does that, and people are now looking for the next really human TV family.

This one looks at people from today’s world. Each week we focus on different members of the family and the moments that make their lives.

Often in comedy you find people being extreme, but this is an example that there’s enough humour in real life.