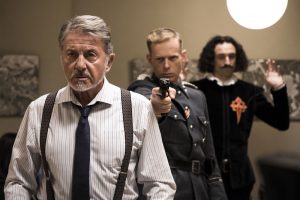 A trio of Spanish primetime dramas are set to make international headlines.

Spain’s TV advertising slump has hit local fiction budgets hard, but with US imports banished from the primetime schedules of the main broadcasters, local drama continues to connect strongly with audiences.

Sci-fi TV series are thin on the ground, but The Department of Time, La 1’s biggest new fiction play for 2015, enriches the formula with doses of adventure, humour, emotion and a didactic edge.

Produced by Cliffhanger TV and Onza Entertainment, with Javier Olivares as showrunner, the show’s premise is there has been a secret government department since 15th century Spain, which knows the secrets of time travel.

The civil servants working in the department are in charge of watching the doors of time, with the aim of preventing any intruders. In order to do this, time patrols must travel to the past to prevent time-travel crimes.

The Department of Time debuted Tuesday February 24, scoring a healthy 14.8% share and three million viewers. It improved La 1’s daily average by two share points, although it was clearly beaten by the second episode of Under Suspicion, which snagged a successful 19.6% share and 3.9 million viewers for Atresmedia’s Antena 3.

A victim of the relentless ratings war between broadcasters, TVE shifted The Department of Time to Monday primetime, setting up a face-off against another freshman series, Our Guys. Broadcast by Mediaset España’s Telecinco and launching on March 2, Our Guys won a 19.6% share and 3.7 million viewers, also surpassing The Department of Time.

However, Department’s middling ratings – it was pulling in a 13.2% share and 2.8 million viewers after five episodes – have been offset by the enthusiastic response in social networks and unanimous critical approval. There are suggestions it is the best Spanish series of 2015, and that it presents a model for public service broadcaster-funded drama. TVE has greenlit a second season.

Onza Distribution is selling The Department of Time format, while TVE’s international sales division is shopping the finished version. As tape, it is more likely to lure interest from territories with cultural and historical affinities with Spain, such as many of those in Latin America.

The format is, according to Onza sales boss Gonzalo Sagardía, “highly exportable and very easy to adapt in territories with a long historical tradition, such as those from Europe or Asia”. “What the market is looking for is originality; stories told with intelligence that captivate TV audiences,” he adds. “It is true that Spanish fiction doesn’t usually cover the realm of sci-fi, but it is not a genre that we had ever vetoed.”

Our Guys, meanwhile, is a pioneering drama in the Spanish market. The military action drama was developed in collaboration with the Spanish Army. It follows a rescue operation to save two Spanish children after they are kidnapped by a terrorist group while on holiday in Mali.

It has a star-studded cast led by Hugo Silva (Paco’s Men) and Blanca Suárez (The Boarding School) – who plays a female sniper. The show combines adventure, romance and army strategy and is the first series to look at the inner workings of Spain’s special forces. Our Guys averaged a strong 19.6% share and 3.7 million viewers over its three-episodes.

Produced by Bambú Producciones, disturbing drama Under Suspicion follows events after a seven-year-old girl disappears from a close-knit community. After six episodes it had generated an average 19.7% share and 3.8 million viewers for Antena 3, proving resilient despite being moved in the schedules, in late March, to compete against The Department of Time (again).

It also had to contend with the overwhelming success of The Voice, which registered an extraordinary 28.1% share for the March 23 debut of its third season on Telecinco.

Under Suspicion’s twist is that the police agents can’t be revealed and have to go undercover, posing as ordinary neighbours, which allows them to become inside observers of suspects. The series debuted at MIPTV as one of the highlights of Beta Film’s slate, following the same path as two previous Bambú-produced dramas that went out throught the German company: Grand Hotel and Velvet.

One of the most recent, standout moves happened in February, when Portocabo, another Boomerang TV subsidiary, won the Berlinale’s first copro pitching award with thriller series project Hierro.

As part of a more international-friendly trend in Spanish drama, thrillers and female-skewed dramas are travelling well and far better than the comedy series that struggle internationally, but are still in demand locally.

Spanish drama’s relevance abroad is also thanks to the international success of Grand Hotel and Velvet and Boomerang’s The Time in Between. The US network remakes of The Red Band Society for Fox, The Mysteries of Laura for NBC and Star Crossed for The CW have also lifted the profile of Spain’s content creators, as has Bambú and Atresmedia’s participation in European sci-fi coproduction Refugees and Portocabo on the Hierro project with Germany’s Nadcon.

“Until recently, nobody talked about the international success of Spanish drama, but TV networks here are increasingly aware that they can find alternative financing, selling series abroad,” says Bambú’s Campos.

The success of local dramas outside Spain encouraged Atresmedia to launch in 2014 Atres Series, a pioneering TV channel dedicated to Spanish TV fiction, which is currently being delivered to over four million homes in Latin America and the US.

“Local TV fiction production is going through a period of unparalleled growth,” Campos says. “In just 15 years we have evolved hugely. Imagine what will happen 10 years from now, when the young people that today can watch all TV dramas from around the world are leading Spanish TV networks and production companies.”