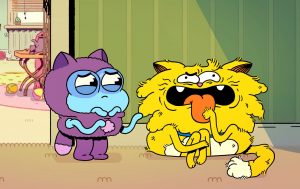 Disney will run Counterfeit Cat on its Disney XD channel in the EMEA region. In Canada, Teletoon has the show.

Ex-Aardman exec Miles Bullough and ex-BBC exec Jesse Cleverly’s Wildseed was set up last year as an ideas incubator and seed funding business. The pair will exec produce the new show, their first for a linear broadcaster under the new banner .

Canadian producer and distributor Tricon’s growing kids and family division will coproduce the series, which will be available as 26x30mins or 52x11mins. There will also be 11x2mins shorts. Reid Harrison (The Simpsons)will script edit.