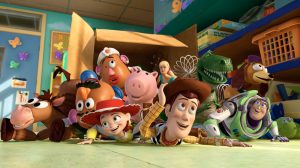 Disney has launched a new movie channel and on-demand service in France that will have a slew of features from the studio and get the upcoming Star Wars movie in an exclusive first window.

Disney Cinema has rolled out on the CanalSat platform, and is programmed with features from Disney and its Pixar and Star Wars brands. There will also be family-focused feature docs from Disneynature.

The service will sit alongside Disney Channel, Disney Junior and Disney XD on CanalSat.

The new channel will be available on the core CanalSat service and its MyCanal catch-up service and CanalSat on Demand.

Disney Cinema will have the hugely hyped new instalment of the Star Wars franchise, Star Wars: The Force Awakens, after its cinema debut.

Other titles on the service will include the Toy Story franchise (pictured), Cars and Ratatouille as well as classic titles such as Mary Poppins and The Jungle Book.

It is the second deal between Disney and CanalSat parent Canal+ Group in recent weeks, after the pair announced they were launching a Maker On Demand service, programmed with content from Disney-owned digital studio Maker.