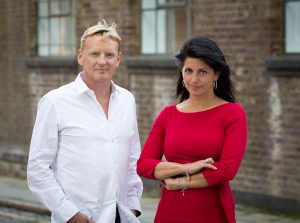 Worldwide, the commercial arm of the UK pubcaster, provided start-up funding to Curve and has a first-look deal with the fledgling indie, an agreement that gave it first refusal on Curve’s content for five years.

Today, Worldwide said it has converted its start-up funding in Curve to equity, giving it a 25% stake in the prodco.

Curve makes factual and factual entertainment programmes. Carey and Lewis’s credits while at Cineflix Media included programmes in those genres such as Salvage Hunters, Trauma Doctors: Every Second Counts and Pet School.

Curve was set up following a management buy-out with Cineflix that saw them take a slate of programming and development assets including the right to produce new seasons of shows including CBBC’s Pet School, Discovery Quest’s Salvage Hunters, Channel 5’s Trauma Doctors and BBC One’s Shame.

At launch, it also had two commissions in hand two commissions, Going For A Drive with Richard Wilson for ITV1 in the UK and My Strange Pregnancy for TLC’s international channels.

Worldwide’s first-look deal will continue to run until 2019 following today’s deal. Worldwide will also be represented on the Curve board.

Mark Reynolds, BBC Worldwide’s genre director for factual, said: “Apart from being a pleasure to work with, Camilla and Rob are two of the most sought-after and innovative producers with a strong track-record in formats and character-led access documentaries.”

Carey, joint CEO of Curve, added: “BBC Worldwide are the perfect partners for Curve Media with their peerless history of nurturing and supporting creative talent. We look forward to a fruitful relationship with them in the future.”