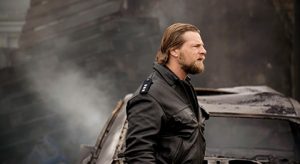 Hulu owner Nippon TV has acquired rights to the format from ProSiebenSat.1 Media-owned Red Arrow, and the resulting show will air on both Hulu Japan and Nippon’s flagship terrestrial TV channel.

The Last Cop, from ITV Studios Germany, follows an old-school police officer that wakes from a 20-year coma and returns to his job in homicide.

In Japan Toshiaki Karasawa (20th Century Boys) will play the lead, who has in this version been in a coma for 30 years, partnering with a timid cop while trying to sort out a complicated private life.

For Nippon, the deal comes more than a year after it bought the assets of Hulu Japan from Hulu in the US, which withdrew from the international market with the sale. Nippon now uses subsidiary HJ Holdings to operate the platform, and is looking to the global market for programme ideas.

“There are a number of cultural reasons why it has proved difficult in the past to remake foreign dramas in Japan,” said Hiroyuki Ueno, producer and manager, programming division at Nippon. “However, remakes provide a great opportunity to bring something new to Japanese audiences and we feel that the time is right to remake this bold and unique drama.

“When Nippon TV acquired Hulu’s business in Japan last year, I saw this as good timing to produce a series that could harness the great synergies across the entire Nippon TV Group.

“This is an important new phase for Hulu, providing our users with an even greater range of entertainment content,” added HJ Holdings’ chief content officer Kazufumi Nagasawa. “We are planning to premier more foreign content on our service and we look forward to producing more original remakes of foreign shows and collaborating with the terrestrial broadcast business to maximize each show’s value.

Hulu Japan today launches the Sat.1 original of The Last Cop (above), which was remade in France for TF1 as Falco. Red Arrow International sells both versions on the global market.

Sylvester Stallone was attached to a US version for TNT, which Red Arrow Entertainment Group-owned Fuse Entertainment and Fox Television Studios were working up, though this trail has seemingly gone cold since its announcement in 2013.