The world in ratings: lessons from 2014

In 2014, the global TV audience’s preferences fluctuated between an enduring fondness for fiction, and for entertainment formats, which made a comeback, the latest top 10 programme rankings reveal. Fiction represented 40% of the programmes in the top rankings, and the gap narrowed year-on-year between drama and entertainment.

Entertainment was largely boosted by reality series and major event shows, while fiction, a category that includes movies, telenovelas and comedies, was kept at the top by drama series. On the factual front, consumption has remained stabled over the past three years, with shows in the category accounting for 21% of the top ten programme rankings in the 67 countries surveyed – largely thanks to the popularity, in troubled geopolitical times, of economic and political news.

Drama series are gaining ground and now represent 63% of the most-watched programmes in the wider fiction category, an increase on 2013. Viewers in Spain and Italy proved avid fans of local series with El Principe and Don Matteo ranked as the top dramas in those territories respectively. Turkish series once again proved to be successful internationally in 2014, and more specifically in eastern Europe – notably, in Macedonia where they represented 70% of 2014’s top 10 performances. 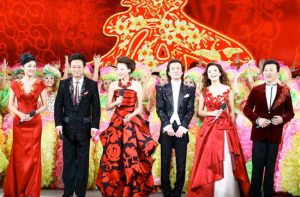 Like every year, major television events made the news throughout the world. The CCTV Spring Festival Gala (pictured) retained its position as the world’s most watched programme with an overall of 166 million viewers split between CCTV General Channel and CCTV3, according to CSM Media Research, while the Sochi 2014 Winter Olympic Games opening ceremony gathered over 33 million people in the US, according to Nielsen Media Research.

On the reality front, international brands have confirmed their success. The Voice, recorded 14 occurrences in world top 10 rankings. More recently The Voice Kids performed particularly well, especially in the Philippines, where it ranked as the most-watched programme of the year with a 57% market share, according to Nielsen.

New programmes also stimulated audiences worldwide, with 21% of the top shows surveyed in the international rankings launched in 2014. A promising future lies ahead for fiction as it makes up 72% of these new hits, leaving a smaller share for entertainment formats. Drama series again represent the winning bet, and accounted for 80% of fiction launches, while viewers also confirmed their preference for local production, which made up 82% of the new drama series hits, versus imported programmes at 18%.

Reality formats are not losing ground and constituted 64% of the new hits in the entertainment category, lifted by popular international formats such as Your Face Sounds Familiar (both the original and kids versions).