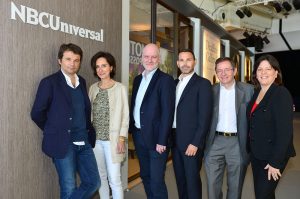 The international production arm of NBCUniversal has inked a deal with French commercial broadcaster TF1 and its German counterpart RTL, and the trio will jointly produce original US-style TV procedural dramas.

The US and French companies made the announcement at a press conference at MIPTV today (pictured).

The deal will yield up to three new procedurals over its two-year course. NBCUniversal has the likes of Law & Order and House and is expected to handle distribution of the new US-style shows coming out of the agreement.

JoAnn Alfano, NBCU-ITVP’s executive VP of scripted programming, and her team in Los Angeles, will have responsibility for overseeing the development and creative aspects of the new show. The projects will be written, shot and cast in North America and run to 12 and 14 episodes per series. Production is targeted to begin in Spring 2016 for a fall/winter delivery.

Alfano said: “There is an incredible talent pool of procedural writers and producers in the US.  For some time now, they have had few outlets for their ideas.  We look forward to working with the wealth of talent that exists in the US and developing the next generation of procedural drama hits.”

NBCUniversal International Television Production boss Michael Edelstein, added: “Procedural drama is a highly popular TV format in the global marketplace due to its episodic, rather than serialised, format.

“For the first time, our partners will have the opportunity to commission US procedural drama directly from a company with a proven track record of success in the genre.”

Joerg Graf, Mediengruppe RTL Deutschland’s executive VP, productions and international acquisitions, said: “This will give Mediengruppe RTL not only the opportunity to produce tailor-made formats for our national markets in Europe but also allows us to secure the entire scope of rights for these programs for all forms of distribution.”

Nonce Paolini, CEO, TF1, said: “From a business perspective, the partnership will, in the medium term, increase the profitability of our programmes and allow TF1 to benefit from exclusive operating rights in France as well as from the financial impact of their distribution worldwide.”