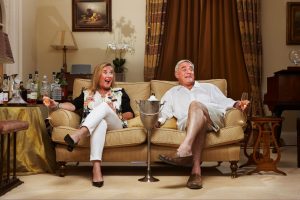 Gogglebox will be made for Chinese satellite TV after All3Media and Zhejiang Huace Film & TV Group struck a deal to make a local version of the hit Studio Lambert format.

The show, which films ordinary people as they are watching and reacting to the week’s television, was set up with Jiangsu Satellite TV in China, but that deal fell through, leading format owner All3Media International to strike a new deal with Zhejiang.

It will make a Chinese version of the show for a yet to be revealed Chinese satellite station. A twelve episode Chinese Gogglebox is expected to launch in the second half of the year.

Duguet said: “Since it launched in the UK, Gogglebox has been on an upward trajectory, becoming one of the most watched and discussed television shows in recent years. I am confident that the team at Zhejiang Huace Film & TV Group will produce a brilliant version for the Chinese market, embedding the Gogglebox brand deeper into the global discourse.”

Du Fang added:  “We are delighted to be entering into this agreement with all3media International. They have a reputation in China as a purveyor of quality factual entertainment properties and we are delighted to have licenced Gogglebox, which is currently proving such hit around the world.”

Gogglebox has sold well and was the format notching the most new international deals in 2014.

Discovery and Liberty-owned All3Media said that it will also be working with Zhejiang  on other formats in the wake of the Chinese deal for the show. “I hope that this deal will usher in a future of mutually advantageous collaborations pulled from our diverse formats catalogue, building on all3media International’s well established success in the region with titles such as Are You Normal,?” Duguet said.