Streaming service Netflix may be losing market share to Amazon in the US, but has started 2015 with a bang, acquiring numerous series and movies and continuing its rapid international roll out.

As new research shows the SVOD player spends more on content than the BBC, HBO and Discovery, TBI takes a look at the US-listed company’s key programming deals of the year thus far. 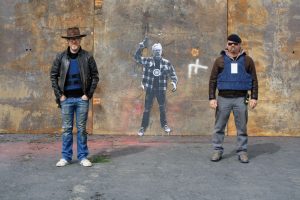 Netflix launched in Cuba in February, confirmed it will launch in Japan this year and Spanish and Italian launches are expected to come in late 2015. A much-touted Australian launch will take place in March. Ahead of that it has acquired a package of Australian series from Beyond Distribution including Mythbusters (left). It has also bought a raft of local comedy specials Carl Barron: A One Ended Stick and Arj Barker: Harvest. The deal also covers Australian-originated kids series including Lightning Point, the first three seasons of H2O: Just Add Water (pictured) and the first season of Mako Mermaids.

Recent international kids acquisitions include The Jim Henson Company’s animated series Dinosaur Train. The streaming service has taken rights in Canada, the UK, Germany and Spanish-speaking Latin America. It also has taken exclusive rights to a pair of classic kids TV series being rebooted for the modern era.

Danger Mouse (pictured), which follows a heroic mouse spy that uses technology to apprehend villains, will debut in the spring of next year in North America, Latin America, Nordics, Benelux and Japan.

Netflix is also teaming with the BBC and Seven Network for a kids original Bottersnikes & Gumbles (below), a new animated series based on the S.A. Wakefield kids books. The series will be produced by UK prodco Cheeky Little Media and Australia’s Mighty Nice. It will be distributed internationally by Cake, and Hong Kong studio Kickstart will handle the animation.

The streamer is also reportedly developing a series based on the popular Legend of Zelda video games.

Meanwhile, Netflix has ruffled the feathers of cinema chains and the wider movie business with the announcement it is moving into original feature films. It is also aggressively buying movies and has acquired exclusive rights to Jadotville, a war film set during an African siege in 1961 starring The Fall and Fifty Shades of Grey star Jamie Dornan.

The film follows the siege of 150 Irish UN soldiers by 3,000 Congolese troops led by French and Belgian mercenaries acting on behalf of mining companies.

The deal, thought to have cost Netflix US$17 million, is the most recent example of the streaming service’s attempt to disrupt what it calls an “antiquated” feature film windowing structure.

It has also paid big bucks to debut Beasts of No Nation, a feature film starring Idris Elba about a West African child soldier. The film, which comes from True Detective director Cary Fukunaga, will launch on Netflix in the US and worldwide later this year.

The fact the film debuts in select theatres at the same time means it should still be able to quality for Oscars 2016 nominations, with buzz around Beasts already significant. Reports claimed Netflix outbid various rivals by paying US$12 million for the rights.

The platform has bagged exclusive international rights to Pee-wee Herman’s Big Holiday, an upcoming comedy film from director Judd Apatow. This features Herman, a popular American hero of stage, TV and film, as he meets a mysterious stranger while on his first-ever holiday.

Also on the film-focused front, there is a renewed deal with Paris-based distributor Prime Entertainment Group. The new programming agreement, which covers the US and Canada, gives Netflix 20×52mins series Hollywood’s Best Film Directors. The series profiles well-known directors including the Farelly Brothers, Ridley Scott, Luc Besson and Jon Favreau.

Back on the scripted series side, upcoming drama originals include The Get Down, an original music-driven drama set in 1970s New York that will be Moulin Rouge and The Great Gatsby director Baz Luhrman’s first foray into TV. It will bow next year.

It also has a straight-to-series comedy from The Millers and Arrested Development star Will Arnett (right, middle). Flaked comes from Arnett and Mark Chappell (The Increasingly Poor Decisions of Todd Margaret) and follows a self-appointed “guru” in an insular Californian community those carefully crafted image and sobriety begins to unravel after he falls for the object of his best friend’s desires.

There is also Club de Cuevos, a Spanish-language comedy about a family feud set against the backdrop of a football club. It is in production in Mexico and will launch internationally in Netflix territories this year. Mexican prodco Alazraki Entertainment is producing the 13-part series. The series reunites the producers of feature films We Are the Nobles, and stars Gerardo Mendez.

Another original comedy, Wet Hot American Summer, has been greenlit. Based on the 2001 comedy feature filmof the same name the series will run to eight episodes and feature several of the cast of the film, which included Elizabeth Banks (The Hunger Games), Bradley Cooper (Silver Linings Playbook) and  Amy Poehler (Parks and Recreation). The series has been written by the creators of the movie, David Wain (Wanderlust) and Michael Showalter (Signs).

Drama series acquisitions include exclusive global rights to The Returned (left), the US remake of French drama Les Revenants, from FremantleMedia International. The deal marks the first time the US-listed streaming service will have premiere rights an acquired drama on its services around the world.

On the factual front, Leonardo DiCaprio has struck a deal to make original environmental and conservation docs for Netflix. The Hollywood star’s prodco, Appian Way, will produce the upcoming series under the terms of a first-look deal with the SVOD service. DiCaprio will produce and exec produce the resulting docs.

He has previously worked with Netflix on Virunga, the Acadamy Award-nominated feature doc about park rangers in the in the titular national park, in the Democratic Republic of Congo.

Doc acquisitions include Hot Girls Wanted, a documentary about professional ‘amateur’ pornography following the Sundance Film Festival. It comes from directors Jill Bauer and Ronna Gradus, will premieres in all Netflix territories this year. The film debuted at the recent doc festival in the US.

In short, Netflix continues to pump out cash for content as it fights to dominate TV’s hottest battleground, subscription on-demand.