Sam Simon, co-creator of Fox’s hit The Simpsons, has passed away aged 59. 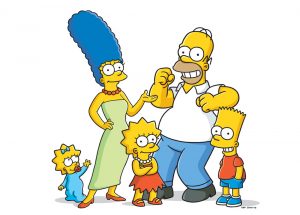 The award-winning producer had been battling colon cancer, and died on Sunday, his agent said.

Simon created animated series The Simpsons (pictured), which follows a dysfunctional mid-American family, with Matt Groening and James L. Brooks. The show has been on air since debuting in the US in 1989.

He left the show after four seasons, but continued to make money from it through a rights deal, and was well regarded in entertainment circles as a producer and humanitarian.

After being diagnosed with terminal cancer in 2012 he spent much of his final years donating his money to charitable causes, especially animal charities.

.@thesimpsons #everysimpsonsever If you would like to honor Sam’s memory, do something nice for the next animal you meet. An enormous loss.

.@thesimpsons #everysimpsonsever Just heard terrible news of death of @simonsam. A great man; I owe him everything.

Seth MacFarlane, whose series Family Guy owes much to the format The Simpsons created, tweeted: “Had the mind of Sam Simon not paved the way for all of us in primetime animation, I wouldn’t have a job. He will be sorely missed.”

Had the mind of Sam Simon not paved the way for all of us in primetime animation, I wouldn’t have a job. He will be sorely missed.

Ricky Gervais, Conan O’Brien and Hank Azaria were among the stars to pay tribute to Simon, while Fox Television Group said in a statement: “Sam helped establish the tone and world of The Simpsons in the early years of this landmark series, and his contributions live on. His philanthropy was well-known and a source of inspiration for many. We are deeply saddened by his passing.”