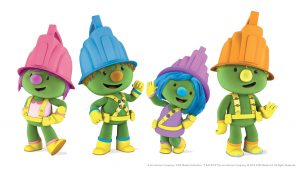 France Télévisions and Spain’s TVE Clan are among buyers of The Jim Henson Company cartoon Doozers.

Dreamia in Portugal and another Spanish network, AMC Networks International-owned Canal Panda, have also bought show in Europe, while the Okto channel in Singapore and TVNZ in New Zealand have also acquired it.

In Israel, kids channel Hop! has taken the show, while in the Middle East Radio Television Brunei and Emirates Cable TV & Multimedia LLC-owned E-Junior in the UAE were also buyers.

Doozers debuted in the US in April 2014 as Hulu’s first original, and goes out in the UK on Cartoonito, on Boomerang in Germany, Boing in Italy, Discovery Kids in Latin America, Nick Jr. in Australia and Cartoon Network in Asia.