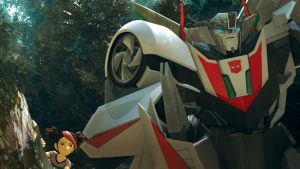 The Turner channel will show Transformers: Robots in Disguise across its global footprint having already acquired US rights to the show from its producer and distributor Hasbro Studios.

The show was originally set for The Hub in the US, but it switched to Cartoon in the wake of on Discovery taking full control of the channel, which was previously a JV with Hasbro.

Finn Arnesen, senior VP of global distribution and development for Hasbro Studios, said: “Cartoon Network makes a tremendous launch pad for Transformers: Robots in Disguise. Complemented by additional Turner channels, Cartoon Network provides the ideal fit across the board for our series, reaching a core demographic of boys 6-11 and kids of all ages.”

The 3D CGI series has a lighter tone than its predecessor Transformers Prime. Hasbro launched it internationally at MIPTV last year.