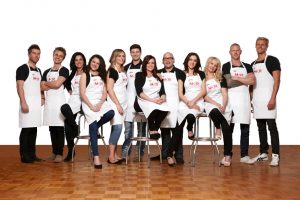 The commercial nets beat their public broadcast counterparts, with the ABC taking 17.4% in 2014 and its smaller pubcaster counterpart SBS accounting for just 5.2%, according to the figures, which are collated by rating agency OzTam.

Seven took top two slots in the roster of most-watched programmes in 2014, with the AFL Grand Final in first and cooking competition series My Kitchen Rules (pictured) second. The final of Nine’s reality series The Block was third.

Seven and Nine accounted for all of the top-ten shows with Ten, ABC and SBS not featuring.

The Block and My Kitchen Rules took all of the 2014 top ten position in the reality TV category.

In the scripted category, Love Child (pictured, right) was the most-watched programme on Nine, ahead of Downton Abbey on Seven and Doc Martin on the ABC. As with the reality top ten, Ten did not register.

The annual results left fierce rivals Seven and Nine both claiming victory. Nine said it was the third year running it had won the key advertising demos while Seven touted its eighth year running of winning the highest proportion of overall viewing share.

Michael Healy, director of television at Nine Network said: “The result means we are the most-watched network with everyone under 65. It is proof our programming resonates with our target audience and that’s what we all work so hard to achieve. We will certainly not be taking our foot off the accelerator – 2015 will be a massive year for Nine.”

Seven’s director of programming, Angus Ross, said: “Seven is all about consistency and trust. With the right mix of Australian-made programming, live sport and the best of international programming, Seven is number one for the eighth year in a row. You can’t get much more consistent than that.”