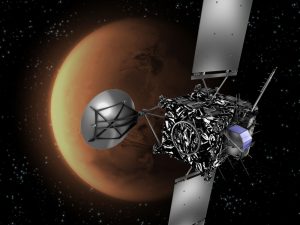 The upcoming doc chronicles 50 years of space exploration and cooperation between the European Space Agency (ESA) and its US equivalent NASA as well as private space travel projects such as Google’s Lunar X Project and Richard Branson’s Virgin Galactic.

The Virgin boss is interviewed in the doc, which also features input from astronauts and other space experts.

Les Tomlin, president, Peace Point Entertainment, said: “Having the first exclusive access to the ESA’s footage from the Rosetta mission makes this must-see television for audiences the world-over.”

The film was produced by Austria-based factual prodco Moonlake Entertainment and company owner Hannes Schalle wrote and directed the film.

Moonlake has exclusive (limited window) rights from the European Space Agency for visuals of the Space Shuttle Rosetta and its landing.

European Space Agency boss Jean-Jacques Dordain, speaking at the start of the doc’s production, said: “This documentary is very important for us summarizing the history of ESA and what a Europe of joined forces can do – as well as visualising the-once-in-a- hundred-years event the Rosetta Mission.”