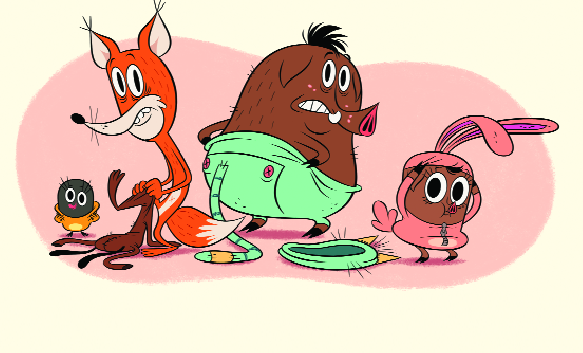 When a group of wild animals move to the big city to enjoy what they think will be the good life with a suburban family, they have no choice but to disguise themselves as domestic pets using zip-up costumes. The premise gives rise to abundant slapstick possibilities and provides the set-up that caught French pubcaster France Télévisions’ attention when it commissioned 2D series Zip Zip from Go-N.

The French indie producer, which is also working up a new version of Tootuff, subsequently brought on broadcasters including Germany’s Super RTL, which came in as a very early prebuyer on the €6 million (US$7.9 million) project.

The writing team of Cynthia True (The Mighty B, The Fairly Odd Parents) from the US and Ian Carney (The Octonauts, Tree Fu Tom) from the UK give the French-produced and commissioned show an international sensibility.

The show has seen buyers in some regions addressing issues around immigration, as the animals move to a new part of the world and try to fit in. However, it is more than anything a straight-up comedy with an ensemble cast including a fox in a dog outfit, a blackbird in a canary suit and pigs dressed as rabbits and cats.

Aimed at 6-9s, Go-N says the 52x11mins show will appeal to kids on different levels. “It’s a simple concept that generates a lot of funny situations,” says Go-N’s Eric Garnet. “Younger viewers will be attracted by the visuals and older kids by the ironic tone and relationships between the characters.”

Final voice talent has yet to be confirmed, but Tom ‘voice of SpongeBob SquarePants’ Kenny played Washington the fox in the pilot. (Although Kenny might struggle to come on full time given his commitments with the Nick series, unless of course the Viacom net buys the show, which would help secure his services.) Buyers will have the pilot to peruse at MIPJunior.

The show: Zip Zip
The producer: Go-N
The distributor: Go-N
The broadcasters: France Télévisions, Super RTL (Germany)
The concept: Slapstick comedy in which a group of wild animals don disguises and try to fit into city life