Netflix has acquired a raft of content from French producers and distributors and ordered another original feature doc.

The streaming service has acquired a 100-hour package of content from Paris-based distributor Prime Entertainment.

The package is for shows for Netflix’s upcoming French service with the US-listed company moving to allay fears in France that it will not support the French content business.

The Prime deal is for a raft of factual titles across the science, human interest, social and crime genres. TBI has learned that these include one-offs Big Bang, My Ancestors and Me, Olivier de Kersauzon: 2000 Leagues Under the Sea, Will you Live Past 100? and The Gang from Lyon.

Doc series covered in the deal include 10x52mins The 10 Commandments and 8x26mins Cycling at the World’s End.

The Prime-Netflix deal was sealed at the Rendez Vous, the French distributors’ content market, which has been taking place this week in Biarritz. The deal gives Netflix the docs for its upcoming French service. 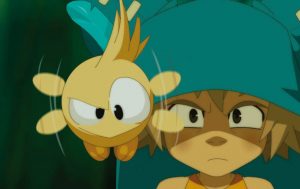 Meanwhile, on the kids front, Netflix has acquired French-originated animated series Wakfu (pictured). The streaming service has taken rights to the fantasy adventure toon across its entire footprint.

The series is produced by indie Ankama out of its studio in northern France. Wakfu launches on Netflix in the US, Canada, UK, Ireland, Netherlands and Nordics on next week, Latin America in the autumn and on its upcoming services as they roll out.

“Animation has a very strong history in France and French animators are among the best and most innovative in the world,” said Netflix chief content officer Ted Sarandos.

He added: “We are thrilled to be working with Ankama to bring its engaging title to millions of Netflix members and expect to further strengthen our relationship with Ankama and other French animation studios.”

On the factual front, Netflix has ordered Chef’s Table, a six-part doc series following six international chefs from David Gelb, the filmmaker who made Jiro Dreams of Sushi. WME negotiated the doc deal.

Tags: Big Bang, Chef’s Table, Cycling at the World's End, My Ancestors and Me, Netflix, Olivier de Kersauzon: 2000 Leagues Under the Sea, Rendez Vous, The 10 Commandments, The Gang from Lyon, Wakfu, Will you Live Past 100?