Netflix’s winding path to launch in France has taken a new turn, with the SVOD service signing an agreement that guarantees local creators remuneration for featured content.

Netflix has made the agreement with Sacem (Society of Authors, Composers and Publishers of Music), which will see Sacem members whose content is featured on the platform paid for the privilege.

Sacem said the agreement demonstrated its “ongoing ambition to… protect and defend the interests of its members and its ability to anticipate the arrival of new digital players on the market”.

Netflix’s launch in France, which comes as part of a larger play in European markets, has been mired in controversy since announcement in May.

French authorities are very protective of locally-created content. They called on Netflix, which is marketed through American series such as Orange is the New Black and House of Cards to promote and invest in local French programming.

Netflix CEO Reed Hastings said this week Netflix “want[s] to invest in French society and French content”, and has added it will look to produce a local series with international appeal such as it has done with its US originals.

However, the firm is basing its European operations in the Netherlands, a move some critics have claimed is to avoid paying large French corporation taxes and distance itself from the country’s tough media regulations.

“As the world’s leading internet TV network, Netflix is a creative business and we respect and admire creators. That’s why we are pleased to have come to an agreement with Sacem in advance of our start in France,” said Netflix’s VP, business and legal affairs Bryony Gagan of the Sacem deal.

“This signature agreement with Netflix before it launches in France strongly demonstrates Sacem’s commitment to be highly reactive and to provide the proper remuneration of the creators in the digital environment,” said Sacem CEO Jean-Noël Tronc. 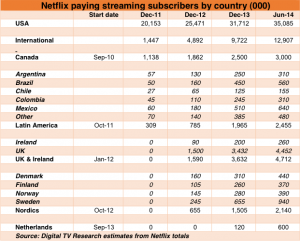 “Authors’ rights and collective rights management are more than ever efficient tools that give effective support to the continuously growing online offer of cultural content from services such as Netflix.”

Separately, Digital TV Research has produced estimates of Netflix’s subscriber base in international markets based on overall SVoD forecasts, taking into account factors such as when Netflix launched, the state of current competition and territory-specific market growth forecasts.