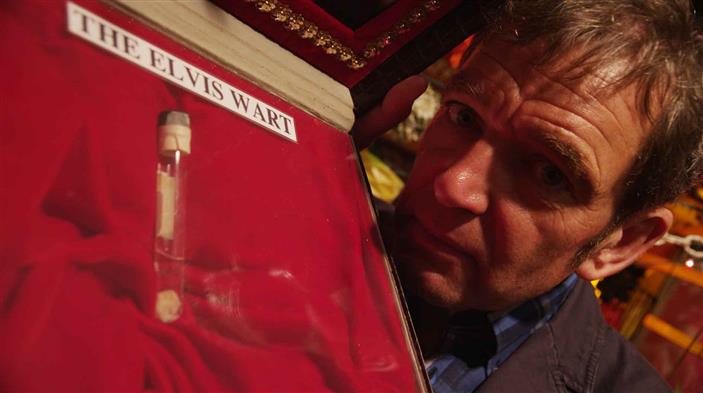 Seasoned documentary maker Rob Davis runs through the moral mazes filmmakers come up against when producing their programmes. When should a director put down the camera, and what constitutes a potential legal problem. In documentary filmmaking, how much is too much?

I’m a documentary filmmaker who runs Double Act Productions with fellow filmmaker Alastair Cook. Over the years, we’ve earned a reputation for making fearless and controversial documentaries centered on usual subjects in all sorts of morally questionable subcultures. By delving into these ‘other’ worlds, we have often found ourselves in situations where we’ve needed to ask ‘should we be filming this? Is it our responsibility to intervene and if so, when?’.

We recently made Dead Famous DNA (pictured above) for UK broadcaster Channel 4. This involved us travelling the world to buy body parts of deceased famous people such as Adolf Hitler and Elvis Presley, with the purpose of extracting their DNA and solving mysteries that surrounded their lives.

We found ourselves walking both legal and ethical tightropes. Laws on genetic analysis are constantly evolving and, presently, in the UK, it’s illegal to analyse the DNA of the dead without consent of the next of kin.

This is not the case in most US states, so we decided to circumnavigate UK law and analyse most of our human relics there. In addition to facing legal obstacles, we had to consider the moral implications of what we were doing: if we found anything interesting within the DNA, was it in the public interest to reveal it? What were the ramifications for the historical figure’s family? How and when should we inform them? What would we do with the genetic codes afterwards? All these big questions necessitated careful thought. That’s probably why the series took three years to make.

In 2010, we made another film for Channel 4 called The Men Who Jump Off Buildings, which followed two men, Dan and Ian, who were addicted to base-jumping. Our intention was to capture the excitement and danger of this extreme sport, but more importantly, to try to understand why these guys loved to dice with death. Nervous of being personally responsible for a major accident or worse, our protocol was to never direct them where or when to jump. We would wait for their call, scale buildings and climb mountains with them and simply observe their jumps.

In Switzerland, disaster struck as we filmed Ian leaping off a mountain top. Complications with his parachute resulted in Ian smashing into the cliff face, landing on the rocks below. Our first thought was ‘is he okay?’ We immediately called the emergency services, but we had to ask ourselves, ‘Shouldn’t we also be shooting this? We’re making a film about the perils of base-jumping and one of our main characters has had a major accident – isn’t this what we’re here to do?’

A crowd of concerned jumpers who had gathered at the scene reacted aggressively to our arrival, to them we were documentary vultures circling around our prey, and no doubt determined to give their sport a bad name. Ian was unconscious – would he be OK with us filming this? After all, we had told him from the start we wanted to document the base-jumping ‘warts ‘n’ all’. We decided to film from a distance, capturing his body being strapped to a stretcher and hoisted into a helicopter ambulance.

When Dan returned from hospital hours later with the good news of Ian’s survival, he showed us footage taken from Ian’s go-pro camera during the jump. We watched as he desperately tried to untwist his lines before smashing into the cliff. We heard him cough up blood from a punctured lung and finally lose consciousness. This was highly disturbing, but important footage. Through Ian’s misfortune, we had captured the dark side of a sport that would have seemed exciting and glamorous to many viewers. Ian allowed us to interview him in hospital and was happy for us to tell the whole story. He wanted the world to see the consequences of having an addiction to base-jumping.

When making documentaries that centre on sensitive and/or controversial subjects, you’re always being pushed to your limits both ethically and creatively. There’s a constant need to balance a desire to make the best film possible with the concerns of your contributors. It’s a bit of a cliché, but these types of films become an engrossing, emotional rollercoaster and when they’re completed, you take a deep breath and then you get stuck into the next one!