Tech giants Google and Apple could try to grab Time Warner from under the nose of 21st Century Fox, according to corporate finance group Moody’s. 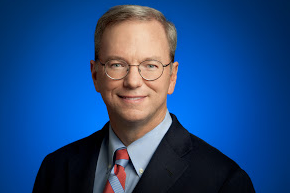 Fox’s US$80 billion bid for Time Warner could “prompt other offers, even from technology giants such as Google, whose chairman is Eric Schmidt [pictured] and Apple”, Moody’s suggested.

Commentators have suggested buying Time Warner could ultimately cost around US$90 million.

Moody’s Begley said: “While a deal is still uncertain, Time Warner management could make a strong case for a higher valuation or independence, pointing to intermediate-term earnings growth opportunities.”

This comes as Time Warner took another step to distance itself from hostile takeover attempts, which have been mooted since the company rejected Rupert Murdoch’s offer out of hand.

According to an SEC filing, Time Warner has amended a bylaw that allowed shareholders to call a special board meeting and push through a sale against management’s wishes.

Sources have told the Wall Street Journal this is to give shareholders more time to evaluate a merger, and to see how both Time Warner and Fox perform against targets in coming months.

The bylaw will be reinstated in time for next year’s annual meeting, the firm has said.