Tell us about the evolution of SVT’s online services.

SVT Play started as a catch-up service a little before the audience had begun to ask for that kind of service. We had noticed more and more videos were being viewed on our website and decided to collect all that video in one spot on svt.se. After creating the platform, we launched the SVT Play brand. The strategy then was to get more and more SVT programmes on the player.

Were you able to obtain digital rights at that stage?

For a long time we couldn’t get the shows that we’d bought, but we’ve been step by step trying to get all rights for all programmes. Today, we have most, but often we just get seven days on programmes from overseas studios. Our goal is to have at least 30 days.

How did you begin commissioning content for SVT Play?

We experimented with programmes commissioned exclusively for SVT that were for young adults. We’d been producing them for the broadcast channels, but they didn’t really fit there. The young audience wanted them, but so much of the rest of the audience didn’t. That made be able to produce programmes in a new way that were really appreciated by the audience.

Give us an example of when you’ve commissioned content creatively.

We have a really big programme, Allsång på Skansen, which is a live artist and audience sing-a-long show. We simulcasted it with the TV service, but then had a web exclusive to continue the show.

Why did you launch SVT Flow in April?

SVT Flow is our attempt to combine the lean-back experience of linear television with the best elements of on-demand that allow you to get rid of shows you don’t like. How does it look to successfully combine these two needs? We think people really want to choose for themselves, but that they also want to be able to watch something they didn’t know they wanted to watch. 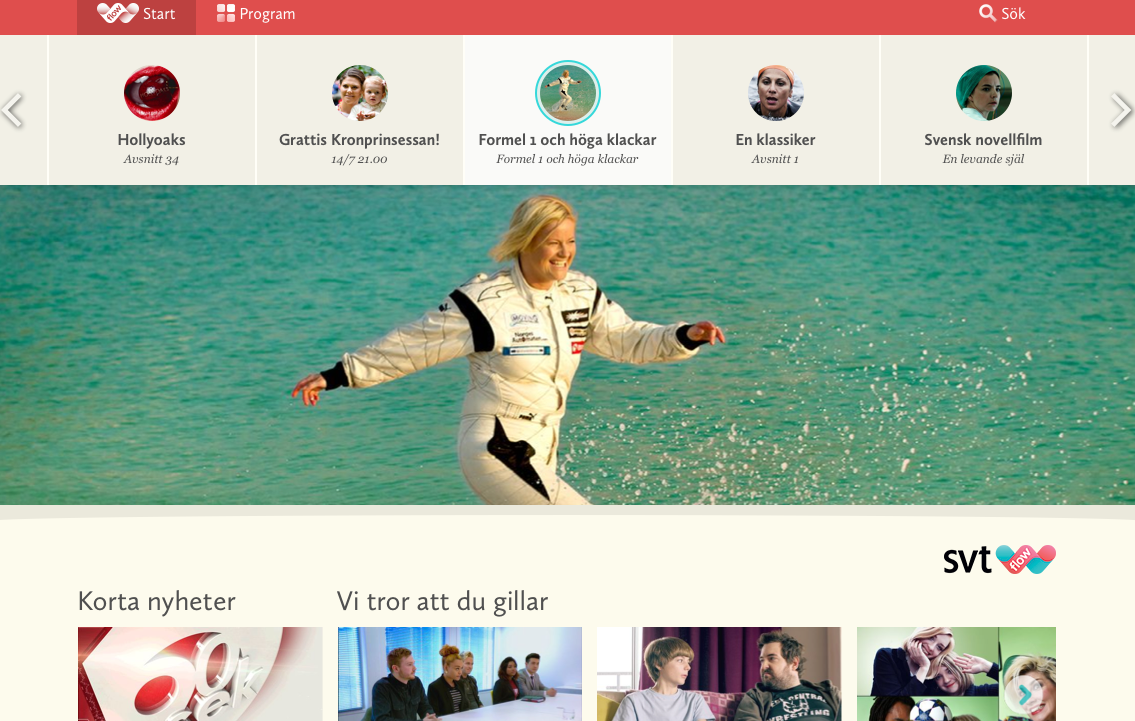 Who are you targeting?

The target group is middle-aged people who are moving their media consumption from linear television to online faster than other parts of the audience. Programmes that compliment the linear channels [are popular with them]. These shows could be niche subjects, but they need to be lean-back and not too complicated.

If you just want a catch-up experience, SVT Play remains the best service to go to and will remain as this huge service, but as more and more people find our programmes through our digital services we are trying to find ways to launch new programmes where they will find them.

Can users personalise the service?

At this point, SVT Flow doesn’t have personalised service, and just offers the playlist. We will add those elements – we want to combine the editorial offer that we hope people will appreciate with the ease of making you own choices. Having said that, you shouldn’t always have to make a playlist to have a playlist.

Most of your online commissioning has now moved from SVT Play to SVT Flow. Why?

This year we have moved most of the original commissioning from SVT Play to SVT Flow, except for commissions for teenagers. We are always commissioning through our in-house department, but very often they bring in independent producers to work on projects – a lot of the titles for SVT Play this year are from indies. SVT Flow only started in April, but we’ve had a couple of titles produced for it that were very much appreciated and have become well-known as a result.

What has been successful so far?

It’s hard to define what successful is yet, because SVT Flow is such a new service. So far, we’ve focused on lifestyle and entertainment, factual entertainment and stories that are close to the daily life of a middle-aged audience. We’ve had a couple of documentaries, and have 90 second news blocks every hour during the daytime. We’re trying to have different genres, but not all.

We haven’t had any exclusive scripted commissioned, but the service has catch-up titles that we take from the linear channels if they fit the audience. We have also picked a couple of drama shows that were produced a few years ago and put them on the service. But scripted drama is just too expensive.

How does producing for online TV differ from traditional linear TV?

We think of production for SVT Flow and other SVT online services as the same as broadcast as much as possible. We don’t create different deals and try not to create different strategies and structures. In the long run, both will be the same thing. We try to hold everything together.

What are the key challenges working in online TV?

When we started people were very happy we had working technical platform. Now there are so many services and big companies investing in technology and functionality that also have nice content. This makes it really hard for us to be able to give the audience the technical level of these services that they’re expecting.

As much as we talk about online services, we are still talking quite small numbers if you compare it to broadcast. It takes much more to be able to launch a programme on an online service. We’re trying to figure out how to do that, and we need to find out. When people in SVT Flow’s target group are slowly but surely moving from linear to online, we need to find where they are through the shows we have made or bought and are trying to distribute to them.

How are rights distribution discussions evolving?

Negotiating the rights is becoming more important. This includes the multi-device question: people are expecting our content to be working on all devices from mobile to tablet to the desktop to the television. They expect the same service and the same rights.

And finally, how are you holding up against tough competition in Sweden?

We try not to talk about competition but you could say we are in the mainstream market. The service that seems to appeal a broad audience like we do is Netflix. They have lots of different kinds of programmes and is a very easy service to use. But we have very different positions – we are always producing new programmes, and a lot in Swedish. That’s not the niche Netflix has, and in that sense, it plays for both of us.

And the other services? Sweden is generally considered a mature market for online video platforms.

HBO isn’t yet that big, but Viaplay is quite broad. Then, of course, there is YouTube. It depends on how you define them – are they to be compared with television or are they something else? It doesn’t matter how you define them; people are watching a lot of video there.