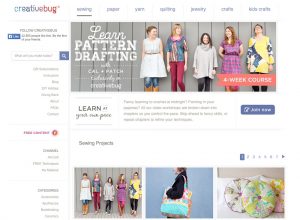 Chernin and US telco AT&T announced the JV, since christened Otter Media, in April, and said they would commit US$500 million to investing in over-the-top services.

Creativebug is the first acquisition made by Otter. The San Francisco-based how-to video site was launched by Jeanne Lewis and Julie Roehm in 2012 and has instruction videos from artists and designers from the craft world. It offers free and paid-for online classes covering skills including sewing, knitting and printmaking.

The site was bought by US digital media firm Demand Media last March for an undisclosed sum. Financial terms were not disclosed for the Chernin deal for Creativebug deal, but Otter reportedly paid US$10 million for the company.

Sarah Harden, executive VP at the Chernin Group said: “Online video is the perfect medium to connect leading artists to their audiences across the globe. And the team at Creativebug has built out a very strong leadership position in this category.”

Ursula Morgan has been named CEO of Creativebug following the Otter deal. She said: “We are excited about reaching further into this community, thanks to the amplified resources of this new relationship, and to continue to extend our premium video class offerings.”