Broadcasters across central and eastern Europe have acquired World War I documentary The Road to War from Austria’s ORF Enterprises. 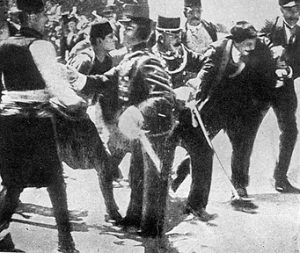 Russia’s Channel One, Slovakia’s STV, CYBC and LTV in Cyprus, MTVA in Hungary, Poland’s TVP and Estonia’s ERR have all bought the 1x50mins doc following NATPE Europe in Prague this week.

The doc (pictured) is a copro from ORF and Metafilm in association with bm:ukk, and uses re-enactments, CGI and previously unseen archive footage to examine how the assassination of Austria’s Archduke Franz Ferdinand lead to the start of WWI in 1914.

STV has also bought ORF Universum docs Owl’s Odyssey, Planet Sparrow, Secrets of Bumblebees, Sky Hunters – The World of the Dragonfly, Danube – Europe’s Amazon and On a River in Ireland.

Croatia’s HRT concluded a doc package deal including Frankfurter, Viennese, Hot Dogs – It’s All About the Sausage and Noble Sweets – A History of Temptation.

TVP also acquired history docs Return to Europe and Sarajevo – The Assassination as part of a package for Belarus viewers.