Show of the week: Power

Power marks Curtis ‘50 Cent’ Jackson’s move into TV drama. When premium cabler Starz announced the series, the immediate assumption was that the show was inspired by the tumultuous life of the rapper and entrepreneur. In fact the star collaborated on the story and appears in the show, but the lead character, James ‘Ghost’ St. Patrick, is fictitious while informed by some of Jackson’s experiences.

St. Patrick leads a double life as a wealthy New York City nightclub owner who caters to the city’s elite and as the kingpin of the most lucrative drug network in New York. The character is actually part-inspired by Jackson, alter-ego 50 Cent and various other people, explains co-creator and showrunner Courtney Kemp Agboh. “There are elements of Curtis’ life in there – Ghost is a combination of Curtis, my father and me.”

300 producer Mark Canton and Jackson had been talking about a music-driven project, and Canton called in Agboh to see whether she wanted to be involved. The resulting eight-part series looks at how people cope with money and success and at the different personas people take on in life. 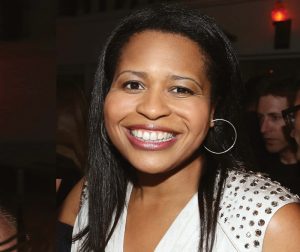 “This is about people who got what they wanted – but how do they then deal with it?” Agboh says. “James St. Patrick and Ghost are two different entities in the same way 50 Cent and Curtis are different.” Omari Hardwick (Kick Ass) plays St. Patrick. Lela Loren (Gang Related) has been cast as Loren, an old flame of Ghost, and Naturi Naughton (Mad Men) is his wife. Jospeh Sikora (Shutter Island) plays a business partner and childhood friend.

“Starz was willing to take a chance on a showrunner that didn’t look like anyone else and a cast of characters that does not look like any other,” says Agboh. “I want to tell a story that is real – and how being of colour [in America] has changed – but the themes are universal.”

Curtis Jackson will play Kanan, a recurring character. “He is a strong force in the series,” Agboh says. “We do see Curtis in a way we’re not used to seeing him.” Agboh adds that she has sketched out future seasons. “Because the stakes are so high, anything can happen to these characters at any time.”

Talent from the world of movies has been migrating to TV for a few years, and big-name music talent making movies is not a new phenomenon. What is unusual is a world-famous musician making small-screen moves. Curtis Jackson says he was lured to TV by the rise in the quality of production and talent.

“I’m a big fan of doing both TV and film,” he tells TBI. “I think TV has evolved over the years. When you look at the quality now – not just visually with HD, et cetera – but the calibre of talent, acting and production, it is similar to the level in films.”

He adds: “When you have Academy Award-winning actors on scripted series on TV, you see the networks and productions spending the money to have the artistic creativity you see in films on TV in your very own households.”

Jackson executive produces Power and wrote some of the soundtrack. “To be able to do the music for the show and include so many of my songs that have never been heard before really brings it all together for me as an artist,” he says.

As 50 Cent, Jackson has a global fan base, while Power is in many ways a quintessentially American story. The singer, actor and entrepreneur says he is convinced that viewers outside the US will be able to relate to the drama series. “Absolutely, I think people in all countries can relate to the narrative and themes of Power, a multi-faceted romantic tragedy set in NY’s club scene,” he says. “It can be viewed in many different ways, and the characters all portray roles that many can associate with in their own lives personally.”

Jackson hails from Queens, and the fact Power was shot in New York was important in terms of international appeal. “We were thrilled to be able to shoot this in NYC, as the city itself plays such a major role in the show,” he says. “And you know NYC no matter where you live. Myself along with Courtney Kemp Agboh, who will serve as executive producer and showrunner, Mark Canton, Randall Emmett and David Knoller have wanted to bring this story to life for some time now.”