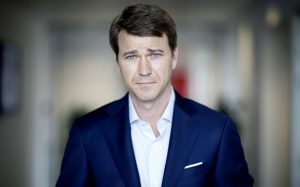 Jensen will oversee all of the broadcast group’s free-to-air operations in Scandinavia with the respective country CEOs reporting to him. He will report directly to MTG President and CEO Jørgen Madsen Lindemann.

MTG has a sizable free-to-air footprint across Scandinavia. The free-TV operations under Jensen’s control include the TV3, TV6, TV10 and TV8 channels in Sweden, TV3, TV3 Puls, and TV3 Sport services in Denmark and TV3, Viasat4, Tv4, P4 and P5 in Norway. He will also take control of the associated radio operations.

The new recruit, a Swedish national, joins from Danish telco and pay TV operator TDC where he was executive VP and chief marketing officer and ran the company’s consumer division. At MTG he will join the ten-strong senior executive management team.

Prior to his stint at TDC, Jensen was CEO of Telenor Hungary and he has also served as CMO of Vodafone/Telenor in Sweden.

Lindemann said: “Anders is a great addition to team MTG and will be responsible for one of our largest businesses. Not only does he understand and have established networks in the distribution world, but he also has a wealth of experience in building successful consumer brands.”

Jensen added: “Video viewing is on the rise and TV remains the impact media of choice for advertisers seeking scale audiences with attractive demographics. In addition, MTG’s Scandinavian free-TV channels are also a well-established and key part of broadband operators’ content offerings.”