Entertainment One has reported overall sales growth at its TV division for the year to end-March.

There was a decline in the proportion of TV revenues contributed by the production and sales department as the family division, which includes the Peppa Pig property, took a larger overall revenue share.

Peppa continued to perform strongly, getting more broadcast hours on Nick in the US and claiming the top preschool show moniker in the Australia, UK, Italy and Spain.

Overall TV revenues at the UK-listed studio increased 22% year-on-year to £162.2 million while EBITDA profit was up 44%, taking the total to £24.3 million.

Investment in third-party content decreased 4% year-on-year to £76.6 million although eOne said it actually put more into buying third party TV rights and the drop reflected a smaller investment on the music side of the business. 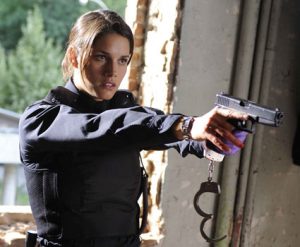 Looking ahead, eOne said it is starting to weigh US syndication opportunities for Rookie Blue (pictured), which is entering its fifth season and it noted new production on the slate including Book of Negroes, an original drama for Viacom’s US cable net BET.

The company also said revenue from the output deals with the El Rey network and AMC will start generating revenue in FY2015. These deals give eOne scripted series from both channels to sell internationally.

Other returning series include Saving Hope, which is heading into season three, Hell on Wheels for season four and Haven, which has been commissioned for a fifth season.

The independent studio also noted an uptick in demand from digital platforms, with new deals with agreed in FY14 and deals in place with the streaming platform and Amazon in several territories.