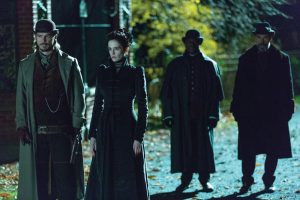 Showtime is owned by CBS and its content sold by distribution arm CBS Studios International.

The HBO Nordic deal gives the pay TV operator rights to Showtime series across its footprint of Sweden, Denmark, Norway and Finland. It will debut the programming in these territories under the terms of the exclusive, first-run agreement.

Titles covered include the buzzy drama Penny Dreadful (pictured), which will be shown within 24 hours of the US broadcast on Showtime, as well as ongoing series including Ray Donovan. The agreement also covers library Showtime series including Californication and Dexter.

“With this partnership with CBS Studios International, HBO Nordic has a unique offering of new and library series from the four major premium US pay TV operators and surely confirms that it is the home of series”, says CEO at HBO Nordic, Hervé Payan.

HBO Nordic rolled out in 2012 and is available as a premium offering via traditional pay TV platforms and as an over the top service. HBO has not disclosed subscriber numbers for the service, which competes with Netflix in the Nordic region.