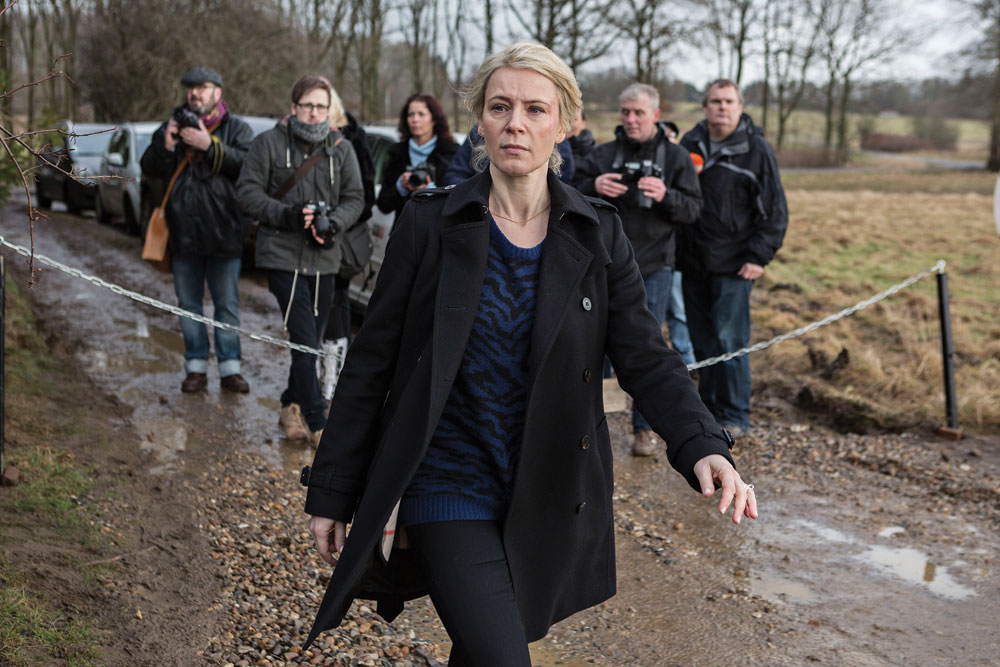 Danish drama specialist Miso Film is spreading its wings following investment from FremantleMedia. Jesse Whittock headed to Scandinavia to speak with the key players as the company reaches its tenth birthday

Simply speaking, the main reason Pete Bose and Jonas Allen decided to sell a majority stake in their business, Denmark-based Miso Film, to FremantleMedia in November last year was scale. The firm, which started as a boutique drama outfit a decade ago in 2004, had grown to the point where it was regularly commissioned in Denmark, had built a strong Norwegian division and was beginning to sell finished tape and scripted formats around the world. What it really needed was a stronger pipeline for the international marketplace.

“Our business model is based on creating and producing good shows and making money on them, but it’s certainly a question of getting them out on the market,” says Bose. “When you spend night and day creating a show you want it to be seen, right?”

“We’d been working with a number of sales companies, some very good and some bad, but we had the feeling that we needed to create a closer relationship with a company that could get on board at an early stage, plan the PR and marketing strategy and get the shows in the right position.”

Now with that partner in place, Miso is already seeing the benefits – FremantleMedia has bought back rights to TV2 crime drama Dicte (see box) from ZDF Enterprises and is planning a major push as the second season shoots, for example.

Furthermore, Miso’s expansion is continuing. Miso Film Sweden has just launched, with Sonnet Film producer Sandra Harms joining to lead the division. Its first TV project is Vik/Stubö, an 8x45mins series in development for commercial channel TV4 based on novels by Norwegian thriller writer Anne Holt. “Sandra is young with a very good reputation,” says Bose of the hire.

Miso’s high-end drama production capabilities are well known – Bose is a film-financing specialist who held senior roles at Nordisk Film’s Per Holst Film and Wallander producer Yellow Bird and had his own firm, FilmPeople, while Allen worked alongside him as a producer at all three companies. This attracted FremantleMedia, which has similar drama production assets in the US, Germany and Australia.

“We hope that we can use what we’ve learned over the past 15 or 20 years to help the expansion of FremantleMedia within scripted,” says Bose. “I’m sure we have things that can be employed, and the other way round.”

He also points to the fact Miso now has an investment committee it can consult on strategic decisions such as the Swedish expansion. “We are no longer a small company, and as you grow, you need certain management skills and support,” he says.

Miso’s series include TV2’s crime drama Den Som Dræber, which was remade in the US by Lifetime as Those Who Kill (pictured) and launched on March 3, and Dicte, which follows a 40-year-old female journalist-cum-investigator. The prodco is currently working on Norwegian drama Acquitted and producing epic war drama 1864, which is being billed as the largest-ever production in Denmark and is being coproduced with pubcaster DR, TV2 Norway and TV4 in Sweden.

Acquitted, with a budget of NOK68.8 million (US$11.4 million), is for TV2 in Norway and is based on a real-life case in which a man returned to his hometown after being accused and then acquitted of his childhood sweetheart’s murder, only to find many local people refuse to believe his innocence. Shooting began in late April. “Placing this in a small village creates a Twin Peaks feel, and that is one of the drivers of the show,” says Bose.

1864, meanwhile, is set to be the biggest Danish television drama shoot ever. It tells the story of two brothers in 19th century rural Denmark who volunteer to join the Danish army to fight Prussian and Austrian forces in the disputed Schleswig-Holstein region. A hundred and fifty years later, in 2014, a woman mourning the death of her soldier husband in Afghanistan finds a diary of the girl both brothers loved and discovers their story.

It has a budget of €23 million (US$32 million), with pubcaster DR providing more than €14 million following the receipt of a special grant for high-end historical drama from the government. TV2 in Norway and TV4 in Sweden, Miso, distributors and the EU Media programme made up the rest of the shortfall. Seventy per cent of production was shot in Prague, Czech Republic.

“We don’t do these kind of shows on a daily basis but every fifth or tenth year there’s a focus on doing a big historical piece,” says Bose. “Doing the show has been fantastic and we’ve learned a lot from it.”

Miso also successfully produces feature films such as World War II resistance drama Max Manus, which was Norway’s biggest-ever box office hit with more than 1.2 million cinema admissions. The business plan going forward is to produce on average two Danish television series, one Swedish series and one Norwegian per year alongside a feature film from Denmark, Sweden and Norway each.

Variation – and not of a theme – is key to the Miso slate. “As a producer, you don’t want to repeat yourself – I admire people who can do 100 episodes of a show, but on a personal note I don’t want to do that,” says Bose. Developing new stories also serves another purpose. “There’s always the risk you won’t get another season, so we make sure we look after the next thing,” he says.

In future, he sees Miso moving into more character-driven pieces. “We’ve primarily done crime but I can see more and more drama coming in to our shows. DR opened some doors with Borgen and The Legacy, but that made us think it had to have a crime element to work internationally. Now, it seems like if the show is good enough and stories and characters work, it will work.”

Focusing on scripts that can work internationally has prepared the firm for the future, he adds – though Scandinavian dramas have been in vogue globally, territories such as France, South Korea and Turkey are vying to become the centre of new drama trends and are flooding the global market with new scripts.

“The popularity of Scandi drama will move on at some point as a natural thing,” says Bose, “but it won’t put us out of business. We’ve focused a lot on not being bound to Denmark.”

Having FremantleMedia onside will certainly aid that strategy.

It’s a bitterly cold February afternoon by the shipyards of Aarhus, Denmark’s second city. Dicte director Kasper Barfoed is taking a break, having just overseen some of the crime series’ more spectacular moments. “We’ve just dumped a car into the water and thrown a guy out of a window,” he says nonchalantly.

Dicte was one of FremantleMedia International’s major scripted pushes at MIPTV. The market represents the first time the distributor has sold the rights after it acquired them from ZDF Enterprises. Parent company FremantleMedia bought its 51% stake in Miso last year.

The show stars actress Iben Hjelde as Dicte Svendsen, a female reporter who moves home to Aarhus after a divorce only to find herself embroiled in criminal investigations.

It is based on a series of books from Aarhus-born former journalist Elsebeth Egholm, who penned scripts for the show, and is described by writer Ida Maria Rydén as “Erin Brockovich going crime”.

Meeting Rydén and her writing partner Dorte Høgh earlier that day at Miso’s central Copenhagen headquarters, it emerges the brief was to create a new genre for Scandinavian drama – the ‘relation-crime’. This does away with the intrigue, lies and mystery of Nordic noir and instead uses realistic but entertaining dialogue. “When we were pitching it we saw it as a mixture of detective story and knowing everything about Dicte’s personal life,” says Rydén.

In essence, half of each 45-minute double episode (or 90-minute single ep) is dedicated to crime and the other depicts Dicte’s personal relationships with confidantes, family and work colleagues.

Miso Film co-owner Jonas Allen admits selling the concept could pose a problem to international acquisitions executives. “The hybrid nature means you might not know if it’s a prebuy or not; is it crime or drama?,” he says. “But when you read the scripts, you truly understand it is a mixture.”

More than 1.2 million tuned in across season one in Denmark, and an average 940,000 viewers watched weekly in Sweden, figures Allen attributes to correct scheduling in the middle of primetime. “In Norway, they ran it a little later, and it didn’t have the same kind of impact as it did in Sweden and Denmark,” he says. “Once you’ve decided what it is, it will work.”

The Dicte writers are critical of the female leads in popular Scandi series such as The Bridge and The Killing, whom they feel too often are written to “act like single men with weird sex lives”.

“No women in our world is like that,” says Høgh. “We want a woman who can wake up looking like shit, have an argument with her daughter and then go out and find a body. We’re building that bridge between normal life and the crime scene.”

“It’s also about using the crime as a motor to look at wider society,” adds Allen. Particularly in the second season, the episodes attempt to understand why a murder or a similarly heinous crime has been committed.

The second run, which goes out later this year, will focus more on the relationships and tone down the procedural elements, says Høgh. “We’re trying to make something a bit more fun and maybe even with a laugh or two.”

France’s Newen Content is already developing a French version through its prodco Capa Drama, though no broadcaster is yet attached. This and the changes to season two mean international deals will be easier to score going forward, Allen predicts.

“It was originally marketed as a traditional crime series, but that wasn’t the show. It was difficult to sell, but the solution is to understand the actual concept. It has been much easier to market for the second season.” Just ignore the groaning criminal in that sinking car, he might add.