Mark Scott, the managing director of the ABC, has said that there will be a reduction in the services it offers and in its headcount after the Australia’s federal government unveiled plans to cut its funding in its 2014-15 budget announcement. 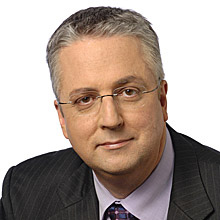 The federal government said it would cut funding for the country’s public broadcaster by 1%, less than the 10% some in the government had sought, amounting to a A$43 million (US$40.4 million) saving over three years.

The ABC maintains the true cost is higher and the broadcaster reacted with dismay to the cuts and immediately there will be redundancies as a result, without specifying how many jobs it plans to shed.

“The task ahead will be extremely challenging for ABC management and staff,” Scott (left) said. “We will need to make funding cuts, while trying to also save money to invest in new priorities to ensure the ABC remains a compelling feature of the Australian media landscape – a public broadcaster in the digital era.”

The Australian public broadcaster faces a three-year A$40 million per annum cut in its budget and has also lost a A$220 million contract to run the international service Australia Network despite being in the first year of a previously agreed ten-year deal to run the service.

Australia’s Department of Communications has contracted of ex-Seven Network CFO Peter Lewis to review of its operations and that of Australia’s other public broadcast entity, SBS. The ABC said yesterday that further cuts are likely to be recommended as part of the Lewis review.

Scott accused the government of going back on earlier pledges. “The government gave repeated commitments before and after the election that funding for the Corporation would be maintained,” he said.

Speaking about the cessation of the contract with the Department of Foreign Affairs and Trade to run the Australia Network, Scott noted there was an international element to the ABC’s charter and said: “This decision runs counter to the approach adopted by the vast majority of G-20 countries who are putting media at the centre of public diplomacy strategies to engage citizens in other countries.”

He added: “It sends a strange message to the region that the government does not want to use the most powerful communication tools available to it to talk to our regional neighbours about Australia.”