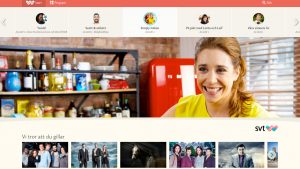 The web TV service allows Swedish viewers to watch linear services from the broadcaster online as well as catch-up with its shows on-demand.

The SVT Flow platform and user interface was developed in-house by SVT and it launched this morning.

“It’s not every day we are launching a new web TV service ,” said Lena Glaser, program director for interactive selection and platforms on SVT. “I am proud , too, that we dare to try again and that SVT Flow is built by SVT’s own development department.”

Aimed at 25-50 year-olds, Flow will offer viewers a suggested playlist of ten programmes, which will be updated daily.

As well as regular content seen on SVT, there will be on-demand exclusives. The launch line-up includes premieres of international titles including British factual entertainment series The Call Centre, which is distributed by BBC Worldwide and Please Like Me, the ABC’s Australian comedy series.