Movie writer, producer and director Robert Rodriguez is the latest big-screen name to make a move into TV. Characteristically, he has done it in a big way, launching his own cable network El Rey in association with US Hispanic broadcaster Univision.

Making TV shows was not an ambition that Rodriguez held. “I was not interested in TV because the process is so convoluted,” he says. “Lots of people I know, big names, have made TV, and you have to make a pilot that might not get picked up, then if it does get picked up they might put it on the wrong night or at the wrong time. It seems like a lot of work for something that’s out of your control.”

However, the rollout of El Rey and control it offered over programme-making meant the shift to TV was actually a smooth one.

“Once I did the network, I knew I would be part of the first original,” he says. “It is proof of concept, and this seemed like a great first show. It was perfect that the movie was already known and had a fan base, and that is bringing interest to the network. This is a new network, and a new show would have been more of a challenge. Also, I controlled the rights, so no-one else could do it, although they had tried.”

The 1996 From Dusk Till Dawn film, which starred George Clooney, Quentin Tarantino and Juliette Lewis, is a cult classic, despite not doing huge box office numbers.

Like the film, the action is centred on bank robber Seth Gecko and his unpredictable brother Richie, played by D.J. Cotrona (G.I. Joe: Retaliation) and Zane Holtz (Holes), respectively. While on the run in Mexico they take pastor Jacob Fuller, played by Robert Patrick (Walk the Line), hostage and ultimately end up in a strip club populated by vampires. Don Johnson (Miami Vice) and Eiza González also star.

The TV ten-parter does not pick up where the movie left off, but rather approaches events from a different perspective.

“The TV process moves fast, but I have already made low-budget movies – all the time when doing that I was shooting to TV schedules.”

“I can explore things that I only got to start to in the film,” says Rodriguez. “It’s almost real-time, but we find out a lot more. There are new events and characters, and we flash back and flash forward. Some of the signposts along the way are similar to the movie, but we’ve changed a lot and everyone behaves in different ways.

“Rather than start after the film, we needed to retell the story and add new characters and storylines as you can tell so much more in a series. A character like Quentin [Tarantino’s] could go on and in so many different ways.” 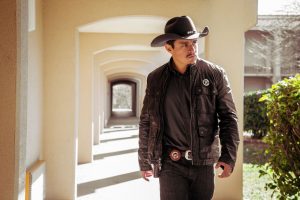 Rodriguez’s background as a low-budget filmmaker helped on his first TV project, he says. “The TV process moves fast, but I have already made low-budget movies – all the time when doing that I was shooting to TV schedules.”

In line with Rodriguez’s hands-on approach to making movies, he was involved on numerous levels. “I was operating the camera and handhelds, writing and composing the music, and also added ‘stills photographer’ to my resume, as I found out TV productions do not always have one,” he says.

In the US, the series launched on El Rey. Miramax is selling the show globally, and Netflix has taken international rights. The SVOD service launched the horror drama in Canada, Ireland, Netherlands, Nordics and the UK on March 12 and on Netflix in Latin America a week later. 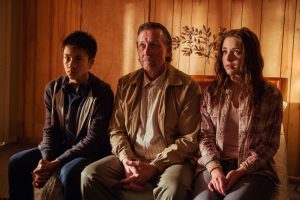 Fans of the movie will warm to the new small-screen version, Rodriguez says. “If the film is the short story, this is the novel. Fans of the original will like it. It will become the definitive version.” Has the From Dusk Till Dawn: The Series experience changed the filmmaker’s attitude to TV and whet his appetite for more? “Not for anyone else, only on my own network,” he says.