JB Perrette has been named as Mark Hollinger’s successor as president of Discovery Networks International. 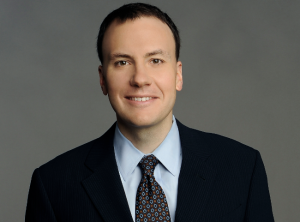 Perrette (left) takes over to lead Discovery Communications’ international channels and content business, which operates in 220 territories and has more than 190 worldwide television channels. All of Discovery’s regional and functional bosses will report into him.

Perrette is succeeding Hollinger (below), who announced he was stepping down in September last year after 23 years with the firm.

“Through strong organic growth as well as selective strategic acquisitions and partnerships, Mark and the team have built Discovery Networks International’s unrivaled footprint with powerful brands that are valued by viewers, advertisers and distribution partners around the world,” said the incoming exec.

Perrette has been with Discovery since 2011, having joined as chief digital officer from NBCUniversal, where he was president, digital and affiliate distribution and content distribution strategy. His promotion indicates Discovery is placing digital content and distribution at the heart of its international business going forward.

He was behind the acquisition of online channels infrastructure firms Revision3 and DeFranco Creative, as well as leading and implementing digital initiatives such as SKYWIRE Live and Animal Planet L!ve, investing in Lumosity and Learnist and launching YouTube channels Animalist and TestTube.

“JB is one of the smartest and most versatile executives I have worked with in the media business.  Since his time at NBC as a leader in business development, distribution and digital to all the success and value he has built at Discovery, JB has it all – strong strategic vision, operational expertise and exceptional team-building skills,” said David Zaslav, president and CEO of Discovery Communications.

“This is a demanding role like no other, which I believe requires a corporate executive with a broad background to oversee all aspects of the business across 220 countries.  Having spent half his career internationally, and with a unique mix of distribution, digital, strategy and business development experience, JB is the perfect fit to lead Discovery’s international operations.”

Discovery claims to be the number one pay TV programmer in global television and last year made its largest ever acquisition by acquiring the SBS Nordic channels for close to US$2 billion. DNI’s profits now match the level the entire Discovery business was achieving seven years ago, a fact Zaslav trumpeted at MIPCOM in Cannes in October.

It also acquired a 20% stake in European pay TV channel Eurosport and made a number of key channels launches, including female-skewed TLC in the UK.

The news comes soon after Discovery extended Zaslav’s contract as CEO until 2020 and after senior changes such as Asian business boss Tom Keaveney relocating to the UK to replace Caleb Weinstein as president, affiliate sales