TV manufacturer Samsung is partnering with the likes of Netflix, Comcast and Amazon to bring streamed ultra HD (UHD) programming to its latest line of television sets. 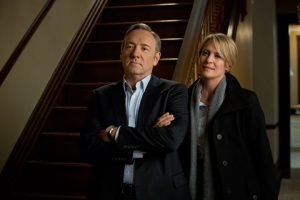 A list of 4K video partners also including pay TV platform DirecTV, producer and distributor DreamWorks and Technicolor streaming service M-Go and film studios Paramount Pictures and 20th Century Fox will all have visibility on Samsung’s new range of products this year.

Streaming service Netflix already has similar agreement in place with other manufacturers to bring its original shows such House of Cards (pictured) to the 4K medium, which is about four times as powerful as 1080p HD. It is also working with Sony to bring UHD programming to the new Bravia TV line.

Under Samsung’s agreement with Comcast, internet-connected Samsung TVs will offer programming through a Comcast app, and crucially without a Comcast set-top box.

Amazon is also creating a 4K solution with Samsung, plus others including Warner Bros., Lionsgate and Discovery. It announced last month it would produce all its new original programming in 4K.

The news came during Japan-based Samsung’s presentation at the Consumer Electronics Show in Las Vegas yesterday. Hollywood director Michael Bay suffered a meltdown during the session after joining a Samsung executive on stage to talk through the new products. After the teleprompter failed, action film specialist Bay (Transformers) decided to leave the stage mid-conversation. The video has since gone viral.