Another report into media industry mergers and acquisitions activity has singled out Netflix and Hulu as the likely drivers of business next year.

OTT services could “act as a catalyst for M&A activity” in 2014, auditor KPMG has predicted.

“Many of these businesses are moving from offering ‘secondary’ content – TV content and films which have previously been broadcast – to offering ‘primary’ content to secure a competitive advantage,” said KPMG’s head of media David Elms.

“This could result in these TV content providers acquiring producers of content. Furthermore, this strategy could lead to a convergence between businesses in other parts of the media sector including radio and print media.”

To this point, Netflix has given no indication it is seeking to grow through content provider acquisitions. Nor has Hulu, though it was armed with a US$750 million war chest earlier this year after its US broadcaster parents decided to invest in the business rather than sell it off. 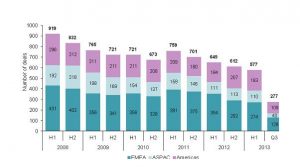 KPMG pointed to an “improving economic outlook, the quickening pace of convergence and continuing structural challenges” as other key drivers of deal-making activity.

Overall, the global media business saw 854 transaction completed at a total value of US$27.6 billion in the first three quarters of this year, which was down from the 933 deals and US$46 billion the year before.

Elms claimed there is now a “pent-up demand” for M&A, which is likely to trigger a more concentrated batch of “bigger” deals. “The pace of change across the media sector is now so rapid that many businesses cannot adapt through a natural process of evolution – creating a market-leading proposition organically is becoming more difficult; companies need to make bold changes in strategy,” he said.

“Together these factors will mean that, in 2014, businesses that have been following a ‘wait and see’ position on M&A, are likely to have to ‘act or get left behind’.”