Television’s most consistent independent producer Mark Burnett tells Jesse Whittock about the success of History miniseries The Bible, why its sequel ended up with NBC and his plans to expand further into international distribution and create Arabic-language programming

What do you do if, 13 years after producing the reality show that redefined  US primetime television, Survivor, you’re looking for a way to reinvent programming once again? You launch a scripted series based on perhaps the only thing more popular than reality TV, the Bible.

The success of Mark Burnett’s dramatised version of the Christian holy book for History, titled The Bible, exemplifies the surge in popularity of US cable drama and only AMC’s zombie drama The Walking Dead competes in terms of pure numbers.

It was produced through LightWorkers Media, the company Burnett operates with his wife and production partner Roma Downey. Its first episode at 8pm on Sunday, March 3, scored a mammoth 13.1 million viewers making it the biggest cable entertainment telecast of 2013.

“Roma and I had worked together for almost four years on the project and we believed it was something that millions and millions of people would gravitate toward,” the London-born, US-naturalised exec tells TBI from his LA base. “But I don’t think we knew in the beginning it would reach the number in the US that it did – including the airings and repeats it reached almost 100 million viewers in five weeks.”

Burnett say the Bible is the “foundation of Western civilisation” and that “all great literature” – from Shakespeare to 19th century US anti-slavery novel Uncle Tom’s Cabin to the C.S. Lewis’s Narnia books – derive from it, meaning there’s no better story to tell. Therefore, it’s no surprise LightWorkers is working on a sequel, AD: Beyond the Bible for NBC, with Hearst Productions and Universal Television.

The series picks up just after Jesus’ Crucifixion and follows the tribulations of his followers as the Roman Empire attempts to stamp out the threat of Christianity.

“If you look at the character base, you’ve got the temple authorities, the Roman authorities under Pilate, the puppet royal family of the Herods and the growing band of Disciples,” says Burnett.

Though NBC is billing it as an event miniseries, Burnett predicts it will go much further. “Clearly, we have a loyal audience that wants the next thing from us, so in a couple of years that will be on and, unlike The Bible, it won’t be for one season. I think it will go for ten years.”

The announcement of the series was significant in that it is an example of a cable series migrating to a broadcast network based on its ratings and cultural impact. While network execs are quick to play down cable’s influence on their schedules, NBC Entertainment chairman Bob Greenblatt’s comment that he committed to the project “the day after The Bible premiered… with no hesitation” suggests otherwise.

Burnett says he has worked with “NBC more than anyone else” on series including The Apprentice, The Voice and The Contender. His decision to go with the Comcast-owned broadcaster over cable proves that he still believes network TV is where the major ratings are.

The biggest challenge facing the programming making business, he contends, is “that there are so many channels and therefore each programme has a diminished viewership compared with even three years ago”. However, he adds: “Television viewing is not shrinking so the question is – as I don’t own a network and I just produce – how do I best reach the most people and monetise? Who is my audience and how am I going to get paid to deliver to them?”

Internally, the move to NBC must have frustrated History, which has become the biggest US cable net on the back of ratings for The Bible and took the initial risk to order the show. Burnett says he reached the agreement based on the fact he thought NBC could offer the scale the show required and because the network allowed his main production company, One Three Media, to keep the international distribution rights.

“It was a jump ball and a matter of what was the right deal for us financially and in terms of rights, and with whom we thought could make it a big event. History did a fantastic job with The Bible but they were cool about AD and understood that sometimes that’s how things go.”

Furthermore, he adds: “I know the NBC team – and not just Bob Greenblatt and [NBC Entertainment president] Jen Salke – but the marketing teams, publicity teams and promotions teams. It’s very comfortable for Roma and me there.”

The issue is further muddied by the fact Hearst, which owns 50% of One Three following a 2011 investment, is also the joint owner of History parent A+E Networks. Burnett says Hearst position was it wanted “everyone to be treated fairly and for the best deal to be made”.

Burnett has become accustomed to finding that best deal on US television for his programmes since starting out with a one-off feature called Eco-Challenge for MTV, which was based on an adventure race to which he had acquired rights. The format was later picked up by Discovery Channel, where it won his first of four Emmys, and then USA Network, where it enjoyed a longer run.

Before TV, Burnett was a soldier in the British Army and saw action in the Falklands War. He emigrated to the US in 1982, initially working for a wealthy LA family, then selling T-shirts on Venice Beach before finally moving into television. “I am a Brit abroad but I learned my trade in America,” he says of his education in television production.

He currently has four shows on air – ABC’s Dragon’s Den remake Shark Tank, which he describes “untouchable against everything on Fridays”; NBC singing competition smash The Voice; The Apprentice, now in its twelfth season; and CBS classic Survivor, which performed well against Fox’s American Idol in its 25th season this year.

Despite all the success in the US, Burnett says it is “high time One Three Media had a hit in England”. He points to upcoming Canadian gameshow Spin Off (pictured) for the CHCH specialist channel as an example of the kind of international growth the company is targeting. 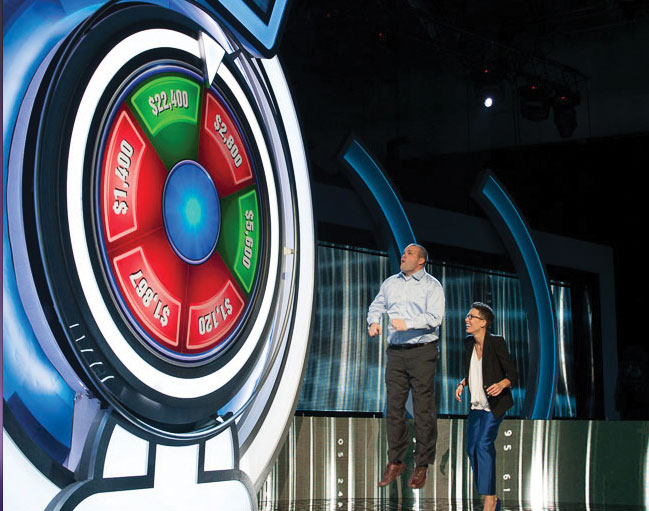 “That’s our first gameshow in Canada, it is produced there, and we are going to be doing stuff in the UK and Australia too,” he says.

Another initiative will target the Arabic-speaking world with original programmes. “I’m very interested in doing something in Arabic. I’ve spent tons and tons of time in Jordan and had lots of discussions in Saudi Arabia [about programming].”

With expansion in mind, it’s unsurprising Burnett is a keen proponent of independent producers retaining international rights, something easier to do with unscripted shows than scripted when dealing with US networks, which makes his AD deal all the more noteworthy.

“Right now we’re focusing on our own stuff with shows like Are You Smarter Than a 5th Grader, which we’ve sold into 58 territories, and The Apprentice, which is in 40. We’ve just finished a new series called Trust Me, I’m a Gameshow Host [for TBS], which is one of the best formats I’ve ever worked on. We’ve made ten episodes and we’re going to take it as a format around the world and launch it at MIPCOM,” he says.

Plans are afoot to widen the scope of activity at sales arm One Three International by taking on third-party content for the first time.

“People are coming to us now asking us to do their distribution,” says Burnett. “We are very boutique and everything we do is of very high quality – we’re pretty choosy and that’s the reputation we’ve got. [OTI’s senior VP, distribution and production] C. Scot Cru has been with us since the beginning and knows the vibe we have, so stuff we think is really good we’ll take. It’s very much an aim.”

Another possible route to market is to launch a channel, either via traditional or online delivery platforms. He admits conversations are afoot but says production efforts are priority at present.

“People are talking to me right now about that. It’s a question for Roma and I to decide what we’re about. We’re not all about money, if we were we’d be worth ten times as much as we are. We’re focused on trying to do great stuff. The Bible was a massive risk but we did it.”

Looking ahead, Burnett’s strong Christian beliefs will remain a core drive, and early development on a third faith-based scripted series has begun. “We’re all about AD right now but we’re also looking at another scripted series around faith,” he says.

One Three, meanwhile, is working on a series Burnett describes as “pretty huge and on-brand for me: adventure and game”. During MIPCOM, Space Race, a series that will see a winning contestant sent into space was announced for NBC. The big-budget event series is being produced by One Three in association with Richard Branson’s Virgin Galactic.

Burnett says of the show: “As a network producer, it’s all about events”.

THE SHOW HE WISHES HE CREATED: “Extreme Home Makeover is such a positive show. My thing is family-friendly [programming], my wife was the star of Touched by an Angel for ten years so we’re in that space. The Christian community watching The Bible is our community; they’re our close friends. The Bible was great family content and if you look at Extreme Home Makeover it’s similar.”

IDENTIFYING A HIT: “What I can tell is when I’m working on something and it doesn’t quite feel right. I can look at something and know it won’t be a massive four-quadrant hit – young and old, male and female. The Bible is four-quadrant. The Voice, Survivor, Shark Tank and The Apprentice are the same. That’s the goal.”

PRODUCING TOP PROGRAMMING: Authenticity is key; don’t over-produce. There are [over-produced] shows on TV that do well that the viewers don’t mind but I want to be a fly-on-the-wall and that has really worked for me. Just make sure that you do something you really like doing. You’re not phoning it in.”