Chamelia is a series of kids books from Ethan Long, the writer who picked up this year’s Theodor Seuss Geisel (aka Dr. Seuss) award for Up, Tall and High! 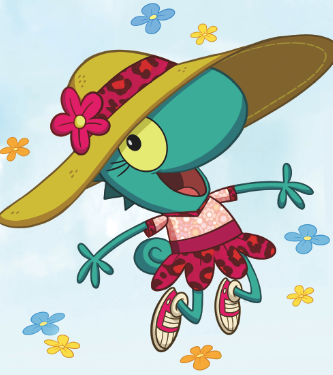 Technicolor and Mercury Filmworks are now working up the property from publisher Little, Brown into a preschool toon. The pair were scouting for new partners at this year’s Cartoon Forum before moving on to MIPJunior and MIPCOM with the same brief.

It is the second time LA-based Technicolor and Ottowa-based Mercury have joined forces after the pair teamed for Atomic Puppet, which is in development for Canada’s Teletoon.

There is no broadcaster attached to Chamelia, but CBeebies sponsored it at Cartoon Forum.

The 52x13mins series will tell the story of Chamelia, the chameleon of the title, who unlike the other members of her species wants to stand out, not fit in. Appropriately, the stories are based in the town of Camouflage. The tales follow Chamelia’s adventures in the playground, at the park and at home.

Kids TV veteran John Bullivant, who has worked at TV Loonland and Hit Entertainment among others, has been brought on to develop the 2D TV series.

Alison Warner, VP, intellectual properties, sales, acquisitions and coproduction for Technicolor, says: “It’s a brand new project for us. When we saw Chamelia she sprang out; they’re wonderful stories. We’re looking for a European or North American partner to come on board.”

The show: Chamelia
The producer: Technicolor, Mercury Filmworks
The distributor: TBC
The broadcaster: TBC
Concept: Preschool show about a chameleon that does not blend in, based on the Ethan Long books