Discovery cited as the biggest TV channel in Europe

The Discovery Channel is the network with the widest distribution in Europe, according to new research.

The Digital TV Research report surveyed 270 channels across 212 operators throughout the EMEA region.

It found that Discovery is carried on 171 operators ahead of National Geographic, Eurosport and MTV, which were on 169, 164 and 160 channels respectively.

BSkyB in the UK was the pay TV platform with the most high definition channels.

In the ranking for HD networks, Fox International Channels’ Nat Geo was top, with carriage on 126 operators. Eurosport, Nat Geo Wild and Discovery Showcase were next and carried on 122, 85 and 75 channels respectively.

Report author Simon Murray said: “Companies stress the importance that a stable of channels has for pan-European success. In this report, 14 groups contributed 257 channels – or 95% of the total. In fact, these groups provided 83 of the 86 HD channels covered. 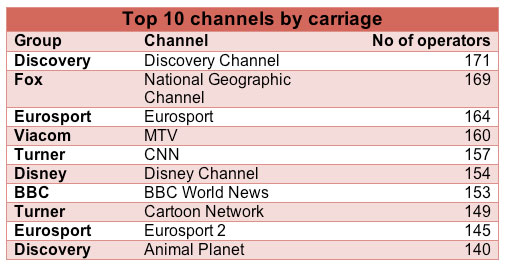