Discovery Networks International EMEA is among pre-buyers of a major Franco-German coproduction that looks at how World War I shaped figures such as Adolf Hitler and Allied Field Marshal Montgomery. 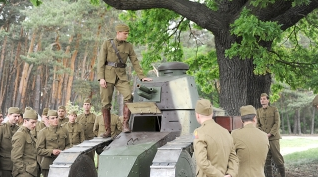 The 3x50mins Doomsday – World War I is a coproduction between ZDF’s department of contemporary history and France Televisions and is shopped on the international market by ZDF Enterprises, which will be giving an international reversioning of the show a push at MIPCOM in October ahead of the 100th anniversary of the Great War in 2014.

TBI has learned DNI has pre-bought the new series, along with Australia’s SBS, to run across its channels in EMEA. It is understood Discovery will launch it in some territories later this year and in the UK early next.

The programme follows the roots of WWI, with episodes running in chronological order from the outbreak of war through to the signing of the Treaty of Verseilles. This includes fully colourised archive footage, re-enactments and personal stories.

“The main focus is on the Western Front, so it was a natural match to talk to France Televisions about a coproduction,” said ZDFE’s factual coproduction manager Dr. Nikolas Hülbusch. “On the basis of the German version, which broadcast on ZDF in 2012, we produced two extended French and international versions, which both have a very international look and feel with regard to experts, footage and point of view.”