“Chefs are the new rock stars,” says Mike Beale, head of formats at ITV Studios, the company behind long-running hit Come Dine With Me. “It’s not about Delia anymore and you could probably track this trend to The X Factor.”

If chefs are the new rock stars, international cooking formats are their stage. The traditional ‘chop and chat’ has been replaced with high-concept, big-budget, fast-paced food formats.

Clare Laycock, general manager of British culinary channel Good Food, agrees. The network aired a number of Delia Smith-fronted repeats at the end of last year, and Laycock admits that they felt too slow paced for the current market. “Traditional chop and chat doesn’t exist much anymore because even the chef led shows have quite exciting characters. Nowadays the chop and chat is much pacier,” she says.

Shows including Gordon Ramsay’s Hell’s Kitchen and Adam Richman’s Man V Food have, arguably, replaced the traditional chop and chat, and the number of fist-pumping action chefs and foodies with quirky cookery formats is increasing exponentially.

Warzone Cooking is a perfect example. The series, which was produced by Norwegian broadcaster TV2 and is being distributed by Nordic World, sees a war correspondent and a celebrity chef decamp to a part of the world currently in conflict – think Afghanistan or Iraq – where they must cook for, and chat to, rival groups of locals.

“It’s a hard sell but we’ve optioned it in Sweden with TV4 and in Denmark with Mastiff,” says Nordic World’s Jan Salling. “You need the right chef and the right war correspondent but if you find them, we’ll provide the safe access, which comes with the format package.”

Salling adds that it is in talks with a number of public broadcasters including Australia’s ABC and the Netherlands’ VPRO about local versions.

“Food is one of those genres like gameshows that doesn’t go away and that people are constantly reinventing. We need something that stands out and is a little bit noisy,” Salling says.

The company is also shopping Jailhouse Cook to international networks. The 8x45mins show, which was developed by Danish producer Koncern for public broadcaster DR, sees a group of convicts open a restaurant within their prison walls. It has been optioned in the United States (by The Ghost Whisperer producer Sander Moses). It is not dissimilar to UK broadcaster Channel 4’s recent Ramsay-fronted series Gordon Behind Bars. “The show was [created] by Koncern long before the Gordon Ramsay show. It’s actually not a copy of the Gordon Ramsay show, it’s the other way around,” adds Salling. 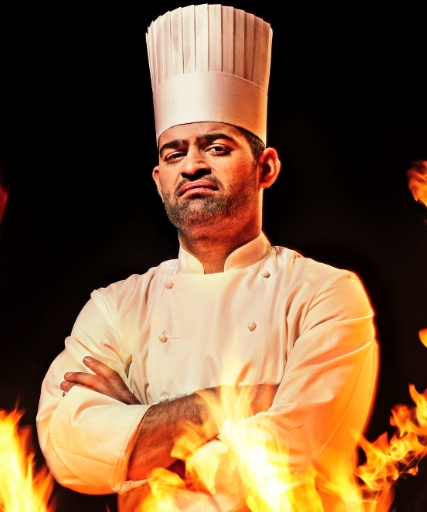 The Great Food Truck Race, a travelling street-food format with a competition element, has proved that formats with a twist can do very well internationally. The finished version of the show, which is produced by RelativelyREAL for US cable channel The Food Network, has been sold extensively by Passion Distribution and chief executive Sally Miles says that the format is also now starting to take off and the first option deal for the property has been agreed with ITV Studios in France.

“They’ve changed the format this year, which I think means it’ll open up to terrestrial broadcasters. Previously, the contestants already had food trucks but in the new season they don’t and they have to create them, which means there’s more at stake and there’s more drama,” she says.

The competition element is central to the genre; every producer, distributor and broadcaster surveyed by TBI, said that they were looking for the next Masterchef. Shine International, which has recently closed deals for the food smash in China and Iceland, is even looking to replicate its own success and has taken the global rights to Scandinavian cookery format Last Chef Standing, produced by Meter TV for Sweden’s TV4.

FremantleMedia used its experience in producing loud studio formats such as The X Factor and Got Talent to snag Temple Street’s Canadian food competition series Recipe To Riches. The show is the search for the nation’s favourite dish and the winning recipe ends up in supermarkets across the country.

“Cooking shows tend to be really successful in the country they are produced in and don’t always travel because they’re talent led or magazine shows. This, however, was a very clear international format that really stood out,” Wallace added.

Central European broadcasters including TV Barrandov (Czech Republic) and TV Joj (Slovakia) are both remaking the format and Australian commercial broadcaster Network Ten is in talks with the distributor.

Supermarket Superstars similarly sees contestants aiming to get their food product ideas into grocery stores across the United States. The series, which is a coproduction between Studio Lambert and The Weinstein Company for US cable network Lifetime, was developed by Eli Holzman, the creator of Project Runway, a few years after he successfully sold his own ice cream related dessert into the Whole Foods supermarket chain.

“The aim is to get a great product or brand into the supermarket. We want to create a model like Project Runway where aspiring food entrepreneurs came in and give them guidance to get into shape for the supermarket,” says Holzman, president, Studio Lambert USA.

Studio Lambert-parent company All3Media International will be launching the format at MIPCOM.

Tim Crescenti, founder of Small World IFT and the man who brought Japanese format Dragon’s Den to the English-speaking market, is hoping that his German-produced, French competition series can replicate the success of the Fuji TV business format. He is launching Chef At Your Door, formerly known as Cash Kitchen, in Cannes. The show, which sees two neighboring families and a pair of celebrity chefs compete using surprise ingredients, is produced by Tresor for French kids and family network Gulli. It has been optioned by Finnish producer Aito and US production company Robyn Nash Prods, producer of Discovery’s Moments of Impact. “There’s no end of thirst for cooking formats,” says Crescenti.

Not all competition series revolve around nasty battles and clever put downs. The Great British Bake-Off, which has been a surprise hit for British public broadcaster BBC Two with an average of 3.5 million viewers, has little in common with the likes of The X Factor or Idols. “It’s a very simple premise to find the best amateur baker,” says Elin Thomas, VP, format licensing, BBC Worldwide, which is distributing the format as The Great Bake-Off internationally. “It’s a very gentle competition. It’s very on trend; baking is very hot right now. It offers an alternative to all of the nasty competition series that are on at the moment. It’s the anti-X Factor.”

Celebrity chefs are also starting to cement their place in the world of competition formats. Anthony Bourdain and Nigella Lawson have teamed up to launch The Taste. The show was developed by Chris Coelen’s Kinetic Content, the US production arm of German media firm Red Arrow Entertainment, for US network ABC. Bourdain and Lawson head a panel of four judges that pit America’s most skilled cooks against each other. Jens Richter, president, Red Arrow International, says that he hopes the company’s first cooking competition format will travel widely. “Once we announced we had ABC on board, we had an immediate response from broadcasters in Australia, Asia and Europe and we’re now preparing the format package,” he says.

Finished programming featuring celebrity chefs such as Gordon, Jamie or Nigella tends to travel quickly and easily. However, the downside is that it’s more difficult to secure format deals for these types of shows. Ramsay’s Fox series Hell’s Kitchen, which is produced and distributed by ITV Studios, is a case in point with only nine local versions. “The success in America has meant that the finished programme is everywhere so it’s hard to show that you can do local versions on that scale. Some countries feel like they need a Ramsay,” says ITV Studios’ Beale. However, he adds: “It’s worked well in Russia, Ukraine, Denmark and Lithuania. It is scalable; if Lithuania can do it, everyone can do it.”

Ramsay is arguably more successful as a television presenter and producer than a restauranteur. He co-owns production company One Potato Two Potato, which produces the US version of Masterchef and UKTV’s My Kitchen, with All3Media’s Optomen Television.

“Gordon is a globally recognised chef and on-screen talent, who has a proven track record in delivering international hits,” says Caroline Stephenson, director of sales, Optomen Television. Ramsay’s Kitchen Nightmares, which was made by Fox in the States and Channel 4 in the UK is Optomen International’s most successful international format with over 30 versions.

Optomen itself has teamed with an even larger celebrity – albeit not from the food world – for its latest series. Food, Glorious, Food is Simon Cowell’s entry into the genre and while it would make sense that Cowell would use his X Factor experience to create the next Masterchef-sized smash hit, Food, Glorious, Food is a slightly more retro format. The series, which was commissioned by ITV1 in the UK and will see the winner’s dish sold in Marks & Spencers stores across the UK, is being launched at MIPCOM.

Optomen Television has successfully built a niche with cookery formats, while chef-lead producers such as Jamie Oliver Fresh One Productions have graduated from being vanity operations to million dollar businesses.

Leopard Films USA, the American arm of the Argonon-owned producer, has recognised this niche and has launched its own food production division. The Cash In The Attic producer has hired Lauren Deen, producer of Lifetime’s Cook Yourself Thin and one of the founding producers at US cable net The Food Network, to become head of food. Deen says that it is working on a number of projects including Taste in Translation for the Cooking Channel and a pilot for The Food Network as well as ideas for non-cooking themed networks including Spike and Travel Channel. “We’re trying to develop the next big thing. We’re looking at doing a combination of on the road shows, buddy food discovery shows and restaurant competition series,” says Deen.