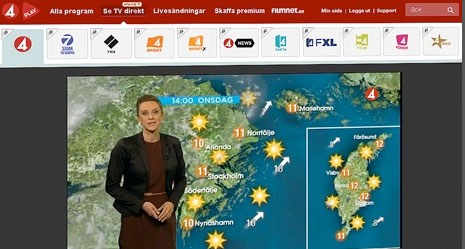 Swedish broadcaster TV4 has relaunched its TV4 Play online TV service with the addition of live streaming of all eleven TV4 channels to multiple screens as a supplementary premium service.

The service is based on a ‘freemium’ model whereby the basic free, ad-supported service is complemented by the subscription offering.

Viewers can access programmes from two channels – TV4 and Sjuan (Seven) – free of charge for seven days after their initial broadcast, while TV4 Play Premium gives access to all 11 channels, including live French Ligue 1, Europa League and Italian Serie A football, for SEK99 (US$14.81) a month, with no minimum contract or cancellation period.

All TV4’s channels are now available on computers and iOS devices, with Android to follow shortly. TV4 said it hoped its channels would be added to third-party distributors’ TV everywhere offerings in the near future.