The show: Day and Night 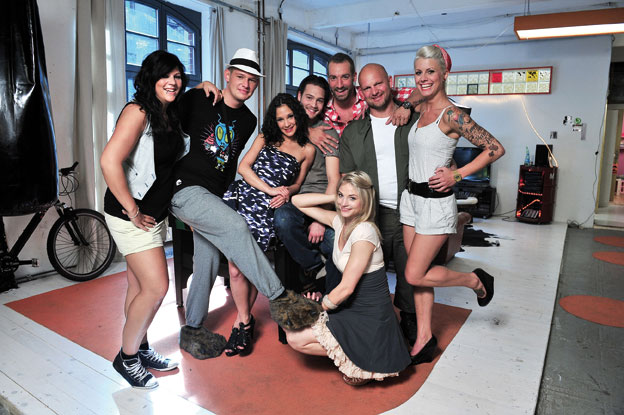 Constructed reality is fast becoming one of the hottest programming genres in the world. While series including The Only Way Is Essex and Desperate Scousewives have enjoyed success in the UK, the largest market for these shows is Germany.

RTL2 aired 120x45mins episodes of Day and Night, a Filmpool-produced series set around a group of trendy Germans living together in the heart of a big city. Each episode spans 24 hours in the life of these flatmates as they fall in and out of love.

The twist, says Stephanie Hartog, executive VP, formats, All3Media, which is distributing the series internationally, is that the cast members aren’t actors at all. “This is fully scripted but using amateur actors so it feels very authentic and the stories are influenced and inspired by real events,” she adds.

Hartog says that this genre has also taken off in markets including Russia and Poland and she is particularly targeting sales in France and Latin America. “It’s a genre that we’re growing around the world and we expect it to roll out globally. It’s cheaper than drama and has a fast turnaround,” she says.

German broadcaster RTL2 stripped the first series of the show daily. “The most cost-effective way to do this is to produce it on a stripped basis, factory style,” adds Hartog.

Impractical Jokers is a prank-based format that sees a group of friends compete to see who can perform the most ridiculous prank.

From eating food off other people’s plates at fancy restaurants to causing trouble at speed-dating events and working for tips at McDonald’s, this hidden camera show was produced by NorthSouth Productions for US cable network truTV.

The show has performed well for the US broadcaster and was subsequently picked up for international distribution by Warner Bros International Television Production, the global arm of the Hollywood studio.

The show is set to be remade locally in the UK and across Belgium and Holland after Warner Bros struck a number of deals. Youth-skewing network BBC Three (UK) has commissioned Shed-owned production company Yalli to produce two ten-minute online pilots to air in May, while Warner Bros-owned production company BlazzHoffski will produce versions in Belgium on VMMa and in the Netherlands on Veronica.

“The fact that we have secured these deals while the first series is still airing in the US shows that international producers and broadcasters agree with what first attracted us to the format; it’s a simple and strong concept certain to make audiences laugh around the world,” says Andrew Zein, senior VP, creative, format development and sales, Warner Bros International Television Production.

The show: The All Star Dog Show

The All Star Dog Show: Celebrities Unleashed is a shiny-floor entertainment format that features famous faces and their furry friends. The canine-based show sees four celebrities and their dogs compete across a series of obedience and agility tasks as well adding in some general entertainment trivia rounds.

Throughout the show, the celebrities will answer dog-related questions, while the screens around them show footage of amazing dogs. In each game, the teams win points that are then translated into cash given to an animal-related charity.

The show has been produced by Brainpool for German commercial broadcaster RTL, which generated over five million viewers for the first episode.

“Dogs are coming back right now; people like to see pets on screens,” says Karoline Spodsberg, managing director, Banijay International, which is distributing the finished tape and format.

“It’s a super cool show and we’ve already had a lot of international interest. The market is looking for big new shiny-floor shows that can play to a family audience,” she adds. “People like to watch celebrities, but watch them in situations that we don’t normally see them in.”

The show: The Devil’s Dinner Party 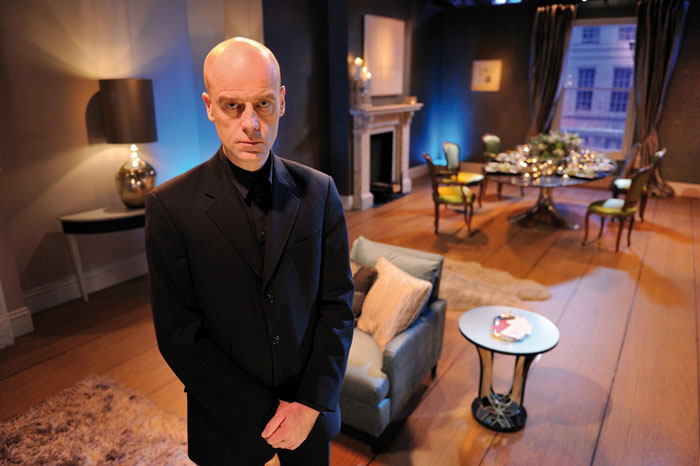 The Devil’s Dinner Party is the first unscripted format to air on British pay TV broadcaster Sky Atlantic, the premium channel set up by the News Corp-backed pay TV platform BSkyB to house the content from its HBO output deal. The show has to stand up against big-budget scripted series on the channel including Luck and Mad Men.

The Devil’s Dinner Party has elements reminiscent of ITV-distributed cooking format Come Dine With Me, except with the twist that there is no cooking involved. Whereas in Come Dine With Me contestants compete to cook meals that they hope their rivals will enjoy, The Devil’s Dinner Party contestants must try their best to stay at the dinner table via a series of trivia questions. The show was devised to examine the psychology of middle class dinner parties.

The show launched on Sky Atlantic at the end of last year, hosted by Tomorrow Never Dies star Pip Torrens. ITV Studios’ international distribution arm will bring the format to MIPTV for the first time.

The show: The Date Machine

Dating is hot right now and all of the major international distributors are stocking up on romantic formats. Shine International is selling The Date Machine, a studio-based dating format produced by Shine-owned British producer Princess Productions.

The UK version has been produced for pay TV network Sky Living. It follows three contestants who must decide whether they fancy a member of the opposite sex on show (who is initially housed in a Celebrity Squares-style box); if successful the pair must answer a series of questions about sex and money to win a holiday date.

The show is hosted by Radio One DJ Chris Moyles and The X Factor star Stacey Solomon.

“It’s a colourful, exciting show that takes all of the key aspects of the dating experience and adds some quick-fire questions,” says Noel Hedges, head of acquisitions at Shine International and former ITV Studios Global exec. “It’s not over elaborate; it’s a straightforward, younger-skewing show that’s not about finding a life partner but all about the fun of dating.”

Hedges adds that the studio set is scalable and says there is a lot of flexibility in terms of producing local versions. He hopes to close format deals at MIPTV, where Shine will launch the show for the first time.

The show: Love At First Flight

The producer: Palm Plus

If The Date Machine is a big-budget studio-based dating format, Around The World in 80 Dates is quite the opposite. The show follows five women on a globetrotting adventure as they travel the world looking for love.

The format will take women aged between 25 and 35 years old who have tried and failed at dating in the Netherlands. “Perhaps they should be looking abroad for love,” says Barnaby Shingleton, head of entertainment at distributor Zodiak Rights. “We’re going to take them on a journey that goes from Brazil to Japan to Russia and Nigeria.”

The women will meet local men and if they like them they can give them one of two golden tickets that allows them to accompany them on their travels. The series is produced by Zodiak-owned producer Palm Plus for Dutch broadcaster Ned5.

Concept: Dating format based on an idea from the sitcom Friends

SallyAnn Salsano, creator of hit reality series Jersey Shore, is back at MTV and this time she’s taking on the dating genre.

Her 495 Productions company has produced Friend Zone, a dating show based on an idea from Friends. In one episode of the hit sitcom, David Schwimmer’s Ross is known as the ‘Mayor of Friend Zone’ as a result of his unrequited love of Jennifer Aniston’s Rachel. This was the genesis of the idea for Friend Zone.

It will follow a group of teenagers as they ask their friends’ advice on an upcoming date.  However, it is then revealed that the date is in fact being put together for both friends.

Caroline Beaton, senior VP, international programme sales, VIMN, says that the broadcaster has great experience of casting sexually frustrated teenagers with interesting back stories. “It’s a slightly uncontrollable journey; it’s cute, not always upbeat but based on a universal theme on unrequited love,” she adds.

The show has already aired on MTV in the US and VIMN is rolling it out across its MTV brands worldwide. Beaton will be at MIP looking to sell the format to third-party broadcasters.

Comedy panel show Room 101 returns after a couple of years on the sidelines.  The format has been relaunched by British public broadcaster BBC One, produced by Hat Trick Productions, and follows its departure from British screens in 2007.

“The new format is a competition with different subjects and celebrities choose one thing that they hate from each topic,” says Hat Trick International director of sales Sarah Tong. “Instead of having a chat about it, they have to persuade Frank Skinner that theirs is worse than others.”

The original format was sold widely across the world and enjoyed particular success in Holland and Belgium and is still on air in Israel. However, Tong admits that format sales were slowing down. She says that clearance costs on music rights and clips have largely prevented selling the finished tape of Room 101, as well as its topical comedy panel series Have I Got News For You, so producing a local version is more cost-effective for international broadcasters.

The distributor will launch the revised format for the first time internationally at MIPTV.

The show: Anything for You

Concept: Studio gameshow with the twist of outrageous challenges

Electus International, the global sales arm of Ben Silverman’s multimedia production company, hopes to replicate the success of gameshow Moment of Truth with its latest Howard Schultz-produced series Anything for You.

“We’ve worked with Howard before on Moment of Truth,” says Pollack. “With that show we did a pilot in the United States but flipped it immediately and sold it internationally, first [in Colombia]. Then we sold it to Fox. We want to replicate that.”

The show is a studio gameshow that sees contestants face 13 multiple choice questions, a la Who Wants To Be A Millionaire?, to win $250,000. However, if they get any of the questions wrong, it’s up to a group of friends and family to keep them in the game by performing a series of outrageous challenges.

The show: Sky is the Limit

Concept: Gameshow set on an airplane

Sky is the Limit is a trivia-based gameshow with a slight difference; it takes place entirely on an airplane. The show follows a number of contestants that must initially compete to get on the plane and then compete by answering a raft of questions while the plane is high in the sky.

“30 couples turn up at the airport and then battle to get on the plane; three couples get on the plane, but by the time it lands one couple is eliminated,” says Avi Armoza, whose Armoza Formats is distributing the format.

The show is produced internally by Israeli broadcaster Reshet and Armoza is taking it out internationally for the first time in Cannes.

“We’re also in talks to do a pilot in the UK,” adds Armoza.