As the anniversary of the sinking of the cruise liner approaches, drama and factual producers are launching a raft of new content. Two Titanic dramas will set sail on TV screens in April to coincide with the centenary anniversary of the liner sinking. Specifically, one will be follow its building over the course of a full series and another miniseries its ill-fated ship maiden voyage.

Simon Vaughan’s UK indie Lookout Point created Titanic, took it to producer Nigel Stafford-Clarke (Bleak House) and together they got ITV involved as broadcaster and distributor and Downton Abbey scribe Julian Fellowes in on writing duty. “Then I knitted together the global financing and with ITV Studios got [US network] ABC and others on board and the Titanic was built,” says Vaughan.

The result is an £11 million UK-Canada treaty coproduction from ITV Studios, Lookout Point and Stafford-Clarke’s own Deep Indigo Productions, with Shaw Media and Sienna Films in Canada and Mid Atlantic Film in Hungary. Almost 100 broadcasters have already acquired the four-part miniseries including TF1 in France and ZDF in Germany.

Fellowes’ multi-arc narrative follows the intertwined stories of various characters and families before events are brought together in the fourth installment in which we see the ship reach its inevitable end. 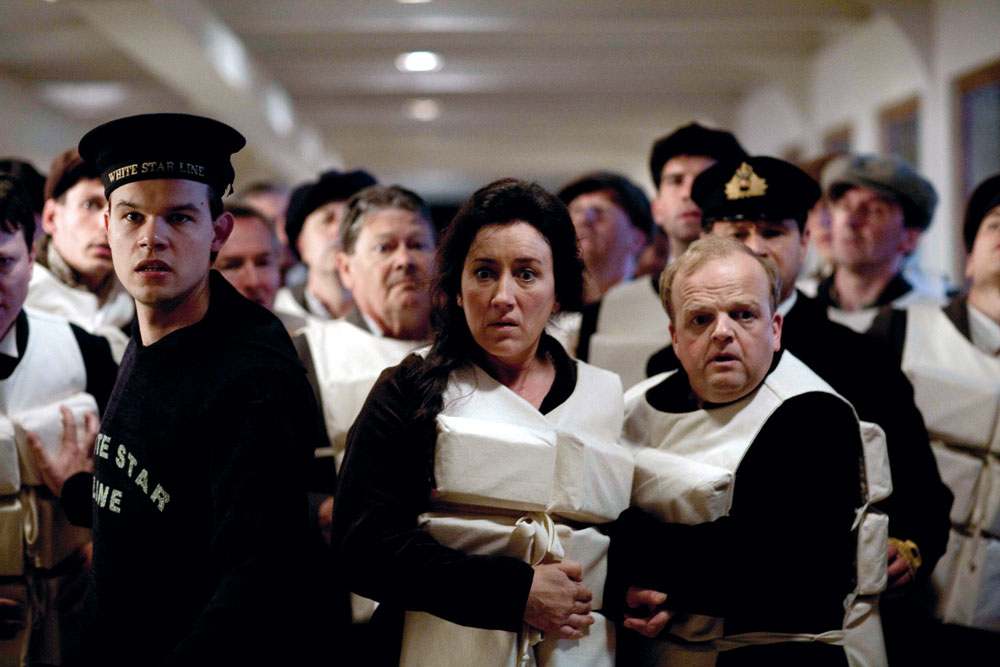 Tracing events before the ship’s demise, Titanic: Blood and Steel is a twelve-part series from Italian producer and distributor De Angelis. It has teamed with RAI in Italy, US producer 3 Arts, CBC in Canada, Artists Studio in the UK, Epos Films in Ireland and Antena 3 in Spain to make a show that tells the story of how the ship was built.

“We decided not to tell the story of the trip again because after the James Cameron movie in 1997 there wasn’t much that we could add,” says Andrea Zoso, De Angelis Group’s managing director. “We wanted to do something different, a prequel, about how this technological feat came about. Once the ship touches the water our show ends.”

Mark Skeet (Hannibal), Matthew Faulk (Vanity Fair) and Alan Whiting (Kingdom) penned the script, tracing how the ship was built in Belfast and the stories of the people that built it. Derek Jacobi, Chris Noth and Neve Campbell are among the stars. Tandem is distributing the US$30 million series in selected territories.

But will either show have any life beyond the April 15 anniversary? “Titanic is a sumptuous period piece and as such I think it will have a shelf-life,” says Lookout Point’s Vaughan.  “My ambition was to create the definitive TV drama as James Cameron has done with his feature film and something that can be broadcast on the anniversary in 10 or 20 years time.”

De Angelis Group’s Zoso goes a step further and says that if his show is a success there is scope for a follow-up. “If ratings and audience perception are good enough, there will be a sequel. It will be about what happened to the 40% of people who survived, but always had the ‘curse’ and the shadow over them of having been on board,” he says.

Factual producers and distributors are also keen to make waves around the centenary. Discovery has IWC Media-produced Titanic: The Aftermath, which tells the human story of the survivors. Dorothy Crompton’s distributor o2c, meanwhile, has international rights to Titanic, the Shocking Truth, a documentary that explores the conspiracy theory surrounding the ship.

A+E Networks has several Titanic-themed shows on its own channels and for distribution including a pair of 3D specials. The shows will be launched across A+E’s channels worldwide to coincide with the centenary of the sinking of the iconic cruise liner this April. Titanic at 100: Mystery Solved is a 1x2hrs 3D series produced by Lone Wolf Documentary Group and will air on A+E’s History. The show examines how the ship sank and fell apart with exclusive underwater 3D footage.

“It’s an exclusive two-hour special and gives a different point of view on how the ship broke up,” says A+E Networks’ senior VP, international programming and marketing, Christian Murphy. “There’s new footage that has helped build a different theory as to why the ship sank and for us this will be a worldwide programming event.”

Also from Lone Wolf is Titanic: 100 Years in 3D. It has 3D footage of the wreck and wreck site combined with stories of the passengers and crew. As well as the 3D shows, there is Nazi Titanic, which was produced by Blink Productions. The 1x2hrs show, which will air on free-to-air channel Channel Five in the UK as well as History, tells the story of Nazi propaganda minister Goebbels’ attempt to make a movie based on a fictional account of what happened to the Titanic.