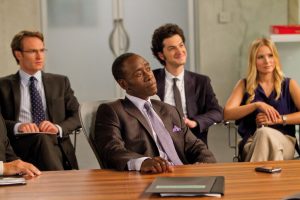 House of Lies is one of the freshest contemporary adult-orientated dramas to emerge on US cable in years. The series is a dark comedy starring Don Cheadle and Kristen Bell as part of a team of jargon-spouting management consultants.

The series is based on the book House of Lies: How Management Consultants Steal Your Watch and Tell You The Time by Martin Kihn. However, there were no characters in the book, which gave creator Matthew Carnahan a clean page. “In the book, it’s just a lampooning of management consultants and it’s a great dictionary. Since there were no characters, I had a fairly blank landscape to work on,” he said.

The series, which airs on Showtime, is Cheadle’s first major television debut. “When I was developing the series one of the execs at Showtime brought up Don Cheadle,” says Carnahan. “I was furious because I thought he would never do a TV series. Of course, he came to the meeting in a full business suit.”

Carnahan’s previous credits include Courtney Cox-fronted drama Dirt, which aired on basic cable network FX. “Basic cable is pretty different. My experience with this was different, not because of the language or the sex but because with FX was I wasn’t sure that they wanted the show that I wrote. There were a lot of notes and negotiations and compomises, whereas with this I wrote it, got some smart notes and made it.”

The series, which is distributed by CBS Studios International and has already been sold to international broadcasters including Sky Atlantic in the UK, has already been picked up for a second season. “[The success] is terrifying and liberating. We can go in any direction and it’s going to be fun to explore,” Carnahan says.